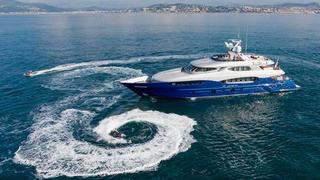 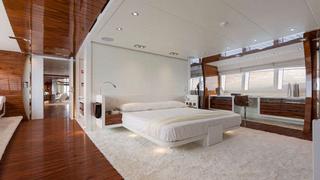 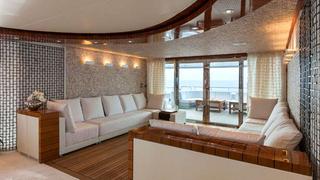 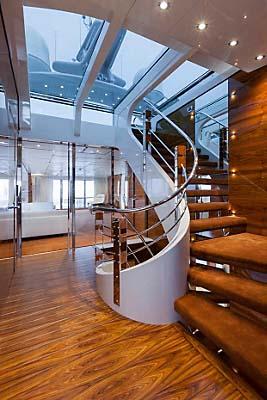 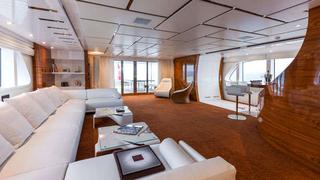 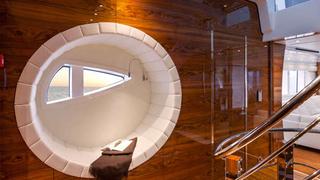 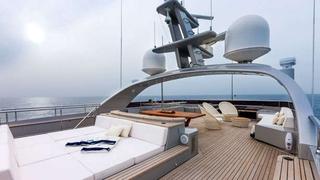 Composite yacht construction is arguably the highest of technologies in yacht building. Aside from the advantages of its light weight and strength, there is a very basic principle at work here: integration. What construction could more neatly encapsulate this concept than a hull moulded in a single piece?

On Vicems 46m Vulcan, this principle goes beyond her composite hull and superstructure and applies to every design aspect. From the layout and engineering to the interior décor, all is seamlessly integrated. The result is a boat whose components cooperate, both practically and aesthetically.

The Vulcan line of large composite yachts is a new step for Turkish yard Vicem, which has previously focused on cold-moulded wood construction. The 46m yacht, the first and largest of the line, features naval architecture and exterior design by Mulder Design and an Art-Line interior. Built on spec, she has modern flowing lines and a distinctive blue hull, but most importantly she offers good performance and spacious living areas, requirements that led to the construction of one the largest composite yachts built in Turkey to date.

The first challenge was the construction of a mould this size, says Turan Ozbakir, Vicem Yachts sales and marketing director, making an impeccable construction while adhering to weights and measures provided by Mulder Design. The second was making sure we maintained RINA values for certifications. In a nutshell, you have to keep the vessel light and you have to fully comply with every spec.

Ozbakir describes it as a crossword puzzle-like challenge, but Frank Mulder, Mulder Designs founder, says they achieved it with aplomb. Its a nice, stiff hull, he says. In a larger composite hull, because of the length, you can get flexing. That is not very comfortable because of low-frequency oscillation (which produces noise). That didnt happen at all with this boat.

Mulder gave the yacht a semi-displacement hard chine hull with a warped bottom, which he prefers over a prismatic hull, to achieve a balance between low resistance and comfort. Combined with twin 3,650-hp MTU engines, large fuel tanks and a displacement of only 275 tons, this hull offers a cruising speed of 20 knots, a top speed of about 27 knots and a range of 4,000 nautical miles at 12 knots. She is also very maneuverable. We have both a bow thruster and stern thruster and these big powerful engines, says the captain, Massimo Marras. But inside you dont feel the engines; close the doors and its very quiet.

This was an important design requirement, feeding as it does into interior comfort. Whatever a boat looks like, or however nice the views from a bed, if you have a lot of vibration, a lot of noise or the boat slams on the waves, its not a pleasure to be on board, Mulder says. We approached this in a combination of ways. First the choice of material, composite, is very easy in getting vibration and noise levels down. We also did a good program in sound dampening. The drive train, main engines, gearboxes and propeller shafts were all well balancedyou shouldnt fight the problem, you should avoid the problem. And the shape of the hullweve been doing this now for many years and we try to find the fine line between low resistance and high comfort.

The result? The boat is very quiet, he says. Its a smooth ride in waves, even when [cruising] in excess of twenty knots.

Mulder was also particular about the beam, something that becomes obvious when walking down the wide side decks.

With a quiet, roomy interior in place Art-Line started to work on the layout. In the communal areas the studio worked to keep the spacious feeling by eschewing narrow corridors and unnecessary angles, favoring instead a free-flowing pattern. For privacy, however, areas can be screened off. For example, from the open door of the on-deck master stateroom you can gaze all the way through to the aft deck or close a sliding door to separate the main salon from the more private areas.

The master suite is an extraordinary space with the bed sitting at the center of a carpeted island. A wooden path sweeping around the room leads to the suites various amenities: a gym, a dressing table, wardrobes, a bronze-walled bathroom with a shower and bath, a lounge area and an office. The path connects all those separate functions so remains as a unity in space and shape, Pieterse says.

The use of composite also allowed the team to make more design elements integral to the structure. The central staircase, for example was so easy to make, says Frank L. Pieterse, co-director of Art-Line. The shipyard is so used to this material, its not a discussion at all, they just make them. And the whole staircase with all the curved shapes becomes also a structural pieceits not just a decorative piece added later. I strongly believe in integration of the hull and the design of the interior.

Sculptured composite with rosewood veneer continues this sinuous style in the main salon. The oval dining table to port mirrors the shape of a nearby windowsill, while a central partition echoes a starboard curve. Carpentry is by Vicems in-house team, while loose furniture is by designers Giorgetti, Zanotta, Gervasoni, Airnova and Moroso. Silky white carpet, natural light flowing from large windows onto high-gloss rosewood or shining through Asian-inspired trellises, lend the salon a luxurious feel.

The full-beam upper deck salon is the party space, with the majority of the yachts indoor seating and a good-sized bar. The burnt-orange carpet is less alarming than it sounds and pairs well with the warm rosewood and white leather sofas and paneling. Again, bulkheads curve and surfaces sheer awaywith a particularly nice concertina effect behind the bar.

Forward lies the wheelhouse, which provides good access to the back of an integrated control panel and has twin fold-out wing stations to port and starboard.

A shaded teak dining table on the upper aft deck is likely to be the most-used dining area on board. Light flows in the upper salon from the aft deck sliding doors and wide windows, all the way through to a 10-foot-high, skylight-lit atrium with stairs leading up to the forward end of the sun deck.

Normally theres only one small aft exterior staircase to the sun deck, so it doesnt really feel connected to the interior, Pieterse says. Here we tried to have overflow from one area to the other all the timeso that its not all separate areas; its a unity.

Mulder also highlights the practical position of the stairs. Its a pretty fast boat so when youre going up theres a strong wind. Entering the flybridge from the forward end, you are more protected, he says.

The yacht has a crew of just eight, which allowed the designers to allocate some of the traditional crew space to the guest areas two twin cabins, two doubles and full-beam VIP, all with en suites. Near the landing, they split the staircase in two, with one set of stairs leading to the forward three cabins and the other to two aft cabins. This arrangement not only helps with traffic flow but maximizes the space for the guests. In fact, thanks to the wide beam and good headroom, the cabins feel surprisingly spacious for a 46m yacht.

The crew cabins forward are also positioned to maximize the available space. We tried to avoid the idea that everything has to be aligned according to the centerline, Pieterse says. The triangular shape of the crew lounge and all the rectangular shapes of the crew cabins on one side saves corridors. You dont lose any space. The crew galley is at the forward point of the triangular mess, so crewmembers dont have to squeeze past the cooks. The twin bunk cabins themselves have en suite shower rooms, with sinks that slide out over the toilets to save space.

Two other new models are joining this 46m to expand the Vulcan line. A 105-foot (32-meter) Vulcan splashed earlier this year, and a 115-footer (35-meter) will launch later this year.

Ozbakir says another 15 to 20 yachts could be produced from the 46-meter mouldwith estimated production periods of 24 months each. Indeed, a few more yachts from this mould would be no bad thing.