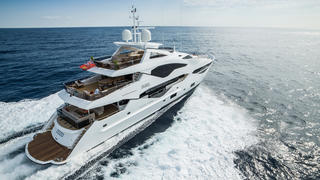 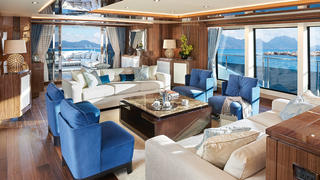 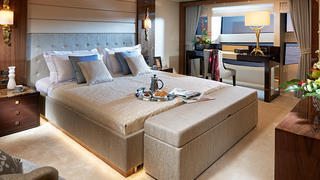 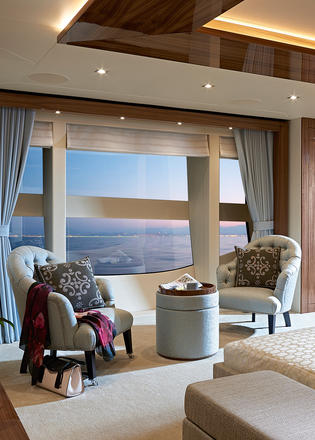 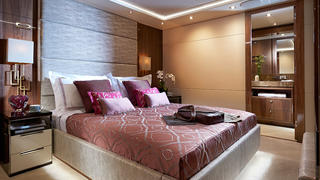 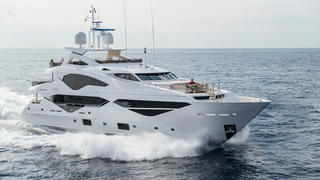 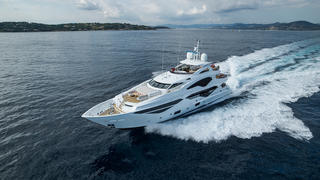 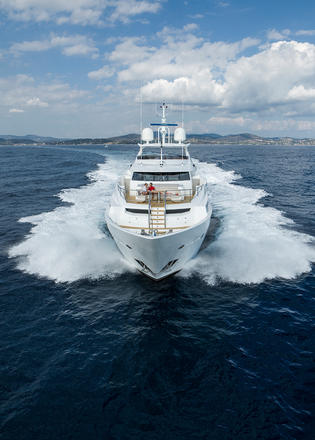 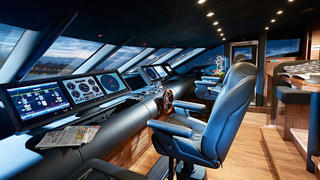 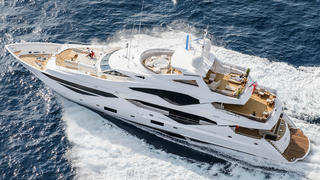 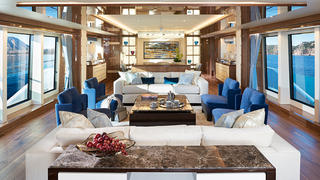 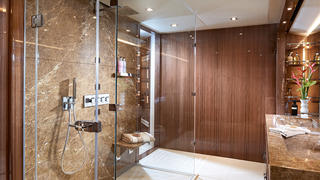 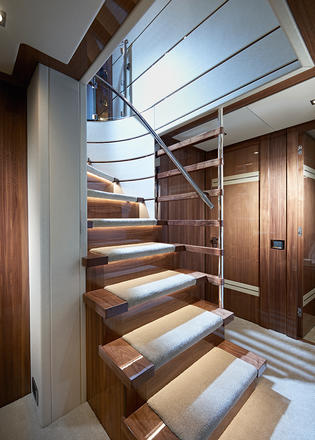 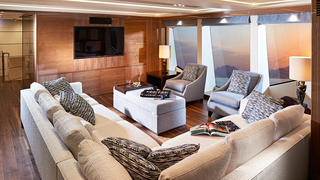 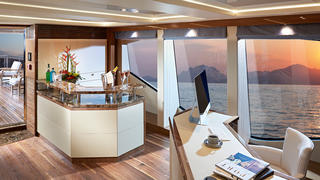 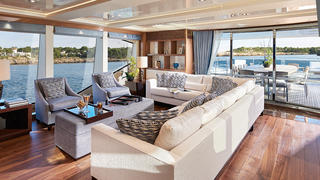 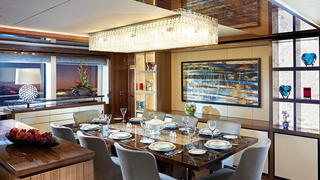 “Buyers are wanting more and more out of the package — bigger decks and segregated exterior spaces, for example. But the way owners are using their boats is also changing,” says John Braithwaite, who co-founded Sunseeker with his brother Robert back in 1969.

“Twenty years ago, the priority was performance — yachts had to be fast. Today, speed ranks lower on the priority list and clients favour comfort, space, natural light, stability and quietness.”

Enter the new Sunseeker 131. The owner of hull No 1, Zozo, was the perfect first client. “He’s a very experienced and very serious boater, and a serial Sunseeker customer. He really gets boating from a practical perspective and he gets us. We couldn’t have wished for a better partner when we developed this model,” says Sean Robertson, sales and marketing director.

Zozo (named after his granddaughter and pronounced “zuzu”) is the owner’s eighth Sunseeker and part of a set. He runs two boats at a time — a smaller, hands-on, family-fun one and a more serious cruising yacht. His previous pair consisted of a Sunseeker Portofino 40 and a 115 Yacht. When he traded the Portofino for a 68 Sport Yacht, he decided to upgrade the 115 to a 131, which was then under development, giving him the chance to add his own experience and perspective.

This is evident on the spectacular bridge. Lined in black Alcantara and leather, the minimalist haven sports two diamond-quilted, black leather adjustable armchairs facing a sleek, black leather dash panel, where keyboards and controls are concealed beneath sliding panels. Above this, seemingly floating, is a pair of elegant carbon fibre consoles containing large flat touchscreens that control every aspect of Zozo’s engineering and navigation systems.

But there’s a slight anomaly in the symmetry: three screens are flush-mounted on the port console but there are just two on the starboard side, along with a grey Furuno FCV-295 fish finder that juts slightly forward — room was made for what is the owner’s favourite fish-finding tool. This detail neatly points to the type of boater he is, a hands-on one who occasionally might want to dangle a rod overboard.

That is not the case for all clients. “Many of our superyacht customers haven’t come up through ownership of smaller boats — they are brand new to life afloat and they won’t accept the compromises that traditional boaters might have,” says Braithwaite. For instance: “They want proper bedrooms, not cabins. Likewise, in the past, guests were happier to mingle with the crew as part of the experience. Today, people prefer a more discreet level of service, so we route crew away from guest areas, [while] a dumb waiter allows food to be invisibly transported up or down from the main deck kitchen.”

This model is based on the previous 40M and 35M engineering-wise, but it sports many new features. “We spend an inordinate amount of time on the details,” Braithwaite says, pointing to the larger oval shape of the handrails as an example. “But it is crucial not to lose sight of the big picture. The key is to create a look, a holistic overview that ensures the total aesthetic is right. I think the 131 looks fantastic!”

He’s not wrong. Standing on the quay looking up, the 131 has real presence and an essential rightness to its form. Longer than the 40M, it has lost the slightly pyramid-like profile of its predecessor. The upper deck reaches a full 2.5 metres further aft (the superyacht sundeck above is extended by 1.5 metres).

“This is one of the items that came very much from the owner’s detailed experience of running this type of yacht,” says Robertson. The extended overhang improves the looks and experience on two decks. “Now the table is completely sheltered, plus we gain more outside space on the upper deck.”

Inside, Zozo’s décor reflects the taste of a knowledgeable owner who doesn’t feel the need to try too hard. Subtle and restrained, it’s a haven of American black walnut with a high-gloss finish on bulkheads and matt finish on the floors, combined with Dark Emperador marble countertops.

“Interior finishes are entirely bespoke,” says Stuart Jones, Sunseeker’s interior design manager. He has been with the company for 15 years, having worked with Winch Design, so he doesn’t use the term lightly. “We’ll fly anywhere in the world with samples, mood boards and ideas to meet our clients and turn their aspirations and ideas into reality.

The interiors of Zozo were created by Sunseeker's in-house team

“It’s a journey that we take with them. And it’s not just surface finishing. We’ll help with the standard lamps, cutlery, crockery, glassware; we even have arrangements with several art galleries that allow us to commission specific modern art suitable for yacht interiors. I believe that we go further than any other production yard to fine-tune our interiors precisely to owner taste,” he says.

Zozo is the fourth yacht he’s designed with this owner. “He didn’t want anything faddish or frivolous. It’s a fusion of old meets new; it’s classic Sunseeker,” says Jones, who gave the lighting special attention. “The client was keen on concealed illumination rather than direct lighting in order to obtain a feeling of almost residential calmness and luxury.

“So we’ve combined the latest linear lighting with overhead features and recessed ‘goalposts’ around windows throughout the yacht to introduce subtle ambient light. We’ve balanced this with wall and table lamps from Porta Romana to terrific effect.”

As wonderful as the artificial light is, natural light is the big talking point aboard the 131, a major departure from the 40M. Ewen Foster, director of design and naval architecture, explains how Sunseeker was able to work this out. “Two elements limit glazing aperture — regulation and engineering. Regulatory bodies, such as RINA, set standards around pressure tests based on the location of the glazing in the hull. But rather than simply working to the standards, we’ve worked extensively with both RINA and our suppliers to… push those boundaries,” he says.

Much thinner than it was, the new glazing can be used on bigger surfaces and in more adventurous ways. The results on Zozo include floor-to-ceiling windows in both the main saloon and the palatial owner's cabin. Cutaway bulkheads emphasise the effect. Drop-down balconies, fine in theory but seldom used, have been avoided, giving the yacht a dramatic external profile.

Sunseeker also lobbied the MCA for changes to crew space requirements, pushing for things that affect comfort, such as larger, more comfortable beds and good-sized shower facilities instead of floor space. All four crew cabins deep in the bow are en suite and open out to a generous mess area. Meanwhile, the captain’s cabin on Zozo’s bridge deck is very close to the size and finish standard of the ample guest accommodations.

The space is due in part to the hull shape. “We use a hard chine hull rather than a round bilge form,” says Foster. “And although a potential advantage of that is high speed with big enough engines, the chief benefit is volume lower in the hull, equating to tremendous space on the lower deck.”

The construction material, in this case GRP, plays an important part here, too. “You don’t lose internal volume to hull frames,” explains Luke Stride, Sunseeker’s principal design engineer. “You’d need a 46 metre steel or aluminium yacht to give you this kind of volume.”

The very sizeable guest cabins on Zozo are all en suite, laid out as two permanent doubles and two with twin single beds that convert into one. The larger two cabins take full advantage of that hull volume to provide guests with walk-in closets.

The space you notice immediately, but it takes a while longer to register what’s missing. Zozo is exceptionally quiet, even on the lower deck close to the engine room. “People want to be able to stay away from marinas for longer,” says Braithwaite. “They’re not using yachts as functions of transport anymore; they’re becoming floating islands as more time is spent at sea.

“So stabiliser hydraulics are mounted in waterproof, sound-insulated boxes; indeed, even the generator PTO (“power take off” adjunct) that runs them has a custom sound shield. Floors are mounted on double-insulated rubber, as are bulkheads — all to snuff out the transmission of noise and vibration.”

And it isn’t just stationary sound levels that impress. On board for Zozo’s maiden voyage to the Mediterranean, I’m on the bridge at 05:00 as we slip silently out of the harbour in Poole, UK, the captain taking full advantage of two exterior wing helm positions.

We are going a steady 18 knots, an arrow-straight wake reaching the horizon as the twin MTU diesels deploy a fair proportion of their combined 6,000hp potential at 1,800rpm. This is a Sunseeker, so performance is a given. Zozo tops out at well over 20 knots but it’ll do the long-distance cruise, too — 10 knots gifting the yacht a 2,000 nautical mile stride.

On deck, the loudest sound is the sea peeling off the hull (over 200 tons of displacement shifts some water). Indoors, the engines are but a distant hum, Zozo feeling absolutely rock steady with just the tiniest hint of the stabilisers working tirelessly beneath the surface to maintain equanimity. It’s an impressive display of engineering synergy.

Zozo is clearly a yacht for an owner who goes boating, not just yachting, a point underscored by the stainless steel rod holder fitted to the rail close to the transom. It looks like that Furuno fish finder is going to see some use.

First published in the January 2017 edition of ShowBoats International