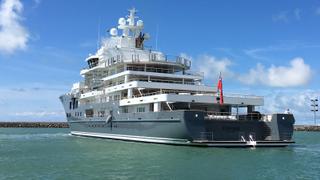 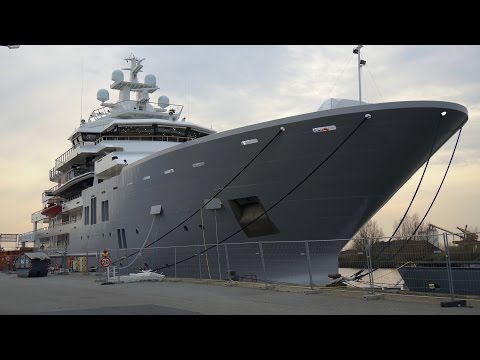 This project is the first to be completed at the former Atlantic Refit Centre site since its takeover by Compositeworks last year. Working in collaboration with owner's representative Manta Maritime, the yard completed the upgrades in three months.

The upgrades involved input from 130 workers and 40 crewmembers, with new handrails, crew quarters and VIP balconies added, as well as the obvious addition of a fully faired hull finish. Her tender fleet has also been expanded with the addition of a 2,500hp HydraSports 5300, which Manta Maritime describes as the most powerful centre console boat in the world.

Formerly known as Kleven hull 366, Ulysses was developed in collaboration with New Zealand naval architects Oscar Mike and Norwegian ship design company Marin Teknikk. Delivered in March 2016, she was hailed as the toughest toybox on the water.

Ulysses is designed for long-range passages in the most testing of sea conditions and has oceangoing capabilities fitting of the Ulsteinvik yard's heritage. Kleven said the 107 “blends a robust, hard-working character with luxurious added extras”.

Making use of its ample size and huge 18 metre beam, Ulysses can accommodate 60 guests over seven decks. It has interiors by British studio H2 Yacht Design and amenities include a helicopter landing pad, helicopter garage and a superyacht swimming pool.

Kleven has collaborated with Marin Teknikk on many of its offshore vessels, bringing his oceangoing yacht know-how to the new build.

Ståle Rasmussen, CEO of Kleven, said: “We have worked with Marin Teknikk for many years, developing numerous offshore vessels together, and the collaboration between us always works well. This vessel is a good example of our ability to develop and build specialised vessels and prototypes.”

Svein Rune Gjerde, CEO of Marin Teknikk, said: “This has been a different and interesting project for our design team.”

This robust type of yacht seems increasingly in vogue, as exemplified by the 76.6 metre Yersin, which is equipped to protect the planet as well as explore it.

Ulysses is currently the world's fourth largest explorer yacht, but will be overtaken by her big sister. The 116 metre version of Ulysses,Hull 370, is due to be delivered this summer to the same owner.