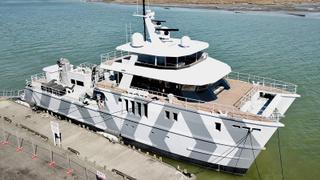 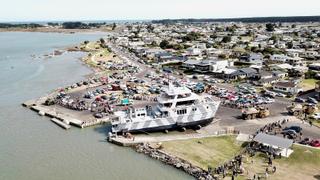 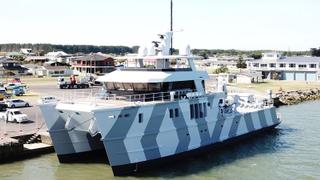 The 39.5 metre tri-deck catamaran The Beast has hit the water in New Zealand, becoming one of the biggest boats built in the country.

More than 1000 people gathered to watch the boat take to the water for the first time at Manawatū Marine Boating Club in Foxton Beach on the North Island of the country.

The Beast is now expected to undergo sea trials ahead of delivery, which is scheduled for spring 2019. The yacht will then be available to charter in the South Pacific through charter company 37 South.

In-build images of The Beast were first released in March 2018, showcasing its all-aluminium design features with naval architecture and exterior styling by LOMOcean.

Captain Andy Grocott previously told Boat International: "A key feature is the ability to launch and retrieve a 13 metre sportsfish yacht to be able to easily take a serious fishing boat to distant atolls and other far-flung destinations where towing or transporting are not viable options.”

The Beast makes good use of a broad 12 metre beam to offer plenty of space on board, with a total interior volume of 493GT. The owners will be developing the interior décor in collaboration with New Zealand studio Oceania Interiors.

Accommodation is for up to 12 guests split across five staterooms, including four double cabins that are convertible into twins and one twin cabin with Pullman berths. Meanwhile, the crew quarters allows for a staff of up to ten people.

Other key features on board The Beast include a 9.3 metre amphibious tender, a 4.5 metre rescue boat and a teppanyaki-style barbecue on the upper deck.

Power comes from a pair of Caterpillar C32 engines and The Beast should have an impressive cruising range, drawing on a total fuel capacity of 76,000 litres.