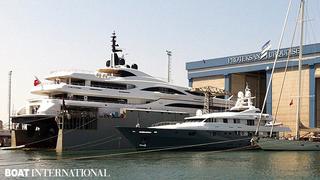 Proteksan-Turquoise has launched their new flagship, the 72.64m Vicky, previously known under the hull number NB54.

The construction of this project started in 2009, but in February 2010 she was sold to a new owner who commissioned H2 Yacht Design to radically restyle the superstructure. As a result, her initial sharp lines became smoother.

The completed steel and aluminium hull arrived at the Proteksan-Turquoise yard in April 2011 for her final fitting-out.

The interior, also designed by H2 Yacht Design, accommodates 12 guests in 6 cabins: the atypical full-beam master suite is in the middle of the bridge deck with two balconies on either side, and the other guest cabins are forward on the main deck.

Lloyd's registered and MCA compliant, Vicky is powered by twin 2,447hp Caterpillar engines giving a top speed of 17 knots, a cruising speed of 15 knots and a range of 7,000 nautical miles at 12 knots, thanks to a fuel capacity of 204,000 litres.

Vicky will be delivered this summer. We will be publishing more pictures in the near future.