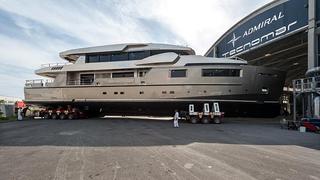 Ordered in the summer of 2011 at the same time of an Impero 45m and a Regale 33m, this launch is significant in that it marks the first Admiral motor yacht to splash since Tecnomar acquired the builder in 2011. The builder has seven more yachts 24 metres-plus on order, some of which are being built at it's newly-acquired Nuovi Cantieri Apuania facility.

The yacht is designed by naval architect Luca Dini in collaboration with the Admiral Tecnomar's Group Style Centre. Featuring a vertical bow, nearly vertical bulwarks and wide windows, her exterior is masculine and military inspired. She's finished off in a opalescent grey paint job. The angled windows on the superstructure are designed to reduce reflections, and wing stations allow for easy docking manoeuvres.

The layout and interior was styled by the Group Style Centre according to the owner's brief. Furnishings are in dark oak and polished Makassar complemented by silk carpets, leather details and polished-Makassar ceilings. A main interior detail is the staircase connecting the upper and lower decks, which features single, cantilevered steps jutting out from the wall and are illuminated by an LED panel polished in bicolour resin delivering a 3D effect. The headboards in each stateroom feature a different art installation. Guests are accommodated in an owner's stateroom and four lower-deck guest cabins; there is a three crew cabins.