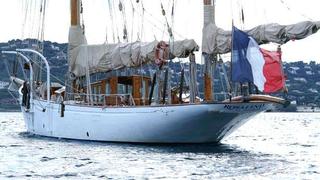 A gaff yawl sailing yacht, Rosalind was designed by Harry Thomas Stow and built by English yard Stow & Sons in Burmese teak on solid oak frames with delivery in 1904. The first owner sold the yacht in 1908, and four years later she was sold again, to a member of the Royal Yacht Squadron who sailed with her for 22 years. In 1936, the ownership changed again to a canny individual who moored her discreetly in Scotland during World War II to keep the Admiralty away from her precious lead keel.

Accommodation is for six guests in three double cabins - all with en suite bathrooms - and she received a comprehensive €2.5 million refit in 1996/97 including a new interior for the deckhouse in Cuban mahogany.

Under power, a 238hp Volvo engine gives her a cruising speed of 9 knots and she can be sailed by a crew of five thanks to her powered winches. Currently cruising in the Mediterranean, Rosalind is asking €1,125,000 with VAT paid.