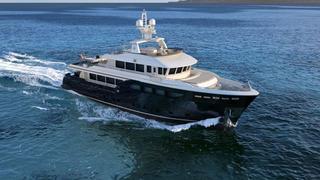 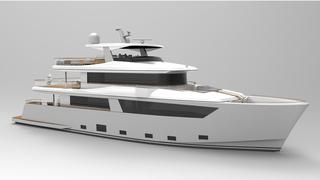 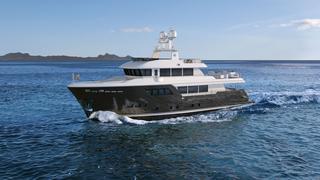 It is a case of full steam ahead for the Italian yard Cantiere delle Marche.

It has been a busy year for the Ancona-based yard, which has six boats under under construction, three of which, the Darwin 86, Darwin 102, and Darwin 107 — are scheduled to be launched this summer. At the end of last year CdM said that it had sold five yachts in less 12 months and had a big enough backlog of orders to run at capacity until 2017.

The great excitement at the yard surrounds the start of construction of the Nauta Air 108. Negotiations for the sale of the yacht began at the Cannes Boat Show last September, a show that CdM said had yielded it at least one contract every time it had attended in the last few years.

The Nauta Air 108 was designed by Milan-based studio Nauta Design, which was also behind the Nauta Air 86, Yolo, launched last year.

Designed specifically for use in the Americas, the Nauta Air 108 has a reduced draught for cruising in shallow waters. The full-displacement steel and aluminium yacht is a true explorer vessel, promising the over-engineering, equipment redundancies, seaworthiness and transpacific capabilities for which CdM yachts are renowned.

It will also sport ample exterior spaces and a customised interior by big-name Italian designers. Further details will be revealed soon.

South America has proved fertile territory for CdM, with a third of its orders coming from that continent such as the Darwin Class 96 sold last year. The latest orders, however, are from European owners.

Of the three boats due for completion in the summer, CdM said that special attention will be focused on the flagship Darwin Class 107 and on the Darwin Class 102. The latter is destined for the American market and has been overseen by a special management team that configured the yacht for extensive and extreme navigation, especially in the Pacific Ocean. This particular yacht will be shown at the Fort Lauderdale 2015 Yacht Show in November.

CdM said it is especially proud of the fact that the ship-owners of both the Darwin Class 107 and the 102 come from prior ownership of yachts built in northern European shipyards.

A spokesman said: “This provides further confirmation of what the market has shown to be a proven fact: CdM has managed to take the best of the two cultures - Italian and northern European - and merge it into a synthesis that has apparently never been done successfully before, all to the advantage of its own shipowners.”