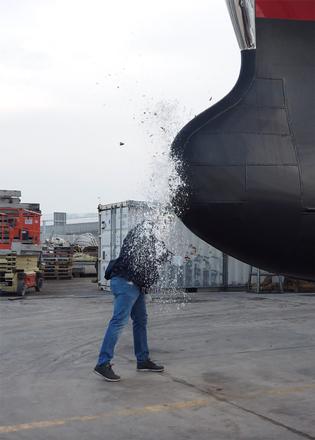 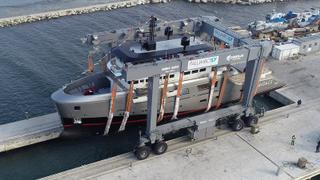 The five-deck yacht, which was previously known as Project K42, was launched on Monday, January 14.

Audace is the yard's first custom explorer yacht and was a collaborative project involving a number of partners.

Designer Andrea Pezzini, of design studio Floating Life, designed the K series in collaboration with Studio Sculli, which handled the naval architecture. The engineering meanwhile was undertaken by Hydro Tec.

Domenico Ranieri acted as the project manager for the build, working in collaboration with Andrea Pezzini, who also acted as the owner's representative.

Commissioned in 2017, Audace features a beam of 9.4 metres and is powered by twin Caterpillar C32 Acert SWAC EPA T3 engines for a range of 5,400 nautical miles at 10 knots.

Accommodation is for 10 guests in five guest cabins on the main and lower decks, while the owner's apartment is positioned separately on the top deck. Audace also accommodates a staff of nine.

A multitude of toys are stored on the forward deck, including a Land Rover Defender, BMW motorbike, water-ski and crew tender. An additional larger tender sits on the main deck aft and is deployed by an accompanying 2.7 metre crane.

Audace also includes two nightclubs "for dancing all night long", which are located on the lower and main decks.

Co-founder and chief executive of CdM, Ennio Cecchini, said Audace demonstrated the yard's "technical and organisational capabilities" and revealed that "many new projects are in the pipeline."

He added: "Affording a one-off project was a challenge we were ready to face. CdM's team brought its wealth of experience to bring this complex project to completion as scheduled."