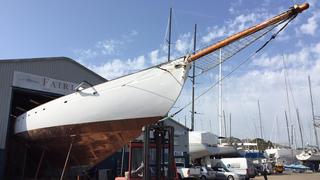 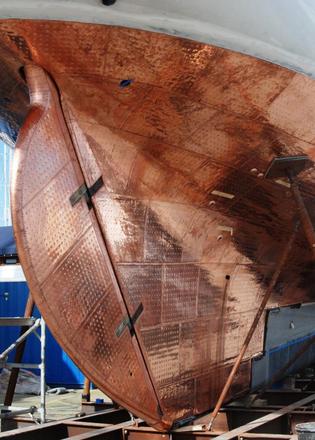 The 31.7 metre Fife classic yacht Kentra has completed her refit at Fairlie Yachts and is gleaming with a new copper hull.

It took the shipwrights at Fairlie Yachts more than 1,300 hours to complete the re-coppering process. Kentra was originally launched with a copper hull in 1923, and she underwent a major rebuild at Fairlie 20 years ago. This is the first time her hull has needed an update since that rebuild two decades ago, and according to the Fairlie, the new copper cladding will protect Kentra’s hull for another 20 years.

Copper sheathing on yacht hulls was developed and introduced by the British Royal Navy in the 18th century in order to combat deterioration that traditional wooden boats faced. Copper bottom cladding was antifouling before there was modern antifouling.

The copper-bottomed hull is definitely a rarity among yachts still sailing and makes Kentra quite special. It works best on yachts that are used often; if sat still for too long, the copper can become tarnished.

While this process is much more expensive than typical coatings, Fairlie says that the cost actually, “works out comparable to other forms of antifouling once you remove the annual costs of hauling and antifouling, which will not be required”. For the yacht owners that wants to avoid regular repainting haul outs, this is a definite benefit.

It’s perhaps no surprise that the idiom “copper bottomed”, referring to a plan or investment that can be trusted, comes from this type of hull coating.

While in for her refit at Fairlie, Kentra also had her topside repainted for the first time in 16 years. This too was done in a traditional method, using brush techniques and single-part paints.

The 92-year-old historic yacht Kentra will be taking part in the Royal Yacht Squadron Bicentenary Fleet Review June 5, 2015, on the Solent in the UK. She will then sail back to the west coast of Scotland, her favoured cruising grounds, for the rest of the summer.