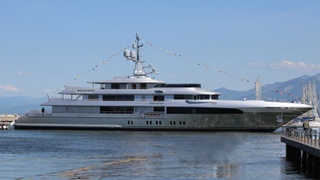 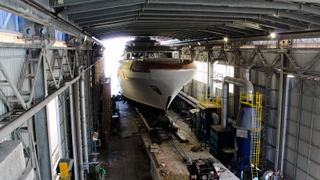 It was launched on June 1 during a private ceremony attended by the owners at the yard's Viareggio facility.

The yacht, which has been built to LY3 standards, is owned by Italian Leasing Company and will be Italian flagged.

Built in steel and aluminium, the yacht's special features include a gymnasium and 5 metre x 2 metre swimming pool on the sun deck.

Interior design has been handled in-house in collaboration with the Milan based studio M2 Atelier, which was chosen specifically by the owner.

Little is known about the yacht’s interior design apart from that it will be functional with comfortable and spacious relaxation areas on all decks.

Regina d'Italia is a full custom project, built on the same technical platform as Main,Eternity _and _Double Down.

Accommodation is for up to 12 guests split between six cabins, including a pair of master suites. The crew quarters allows for a staff of 16 people, with separate cabins for the captain and chief engineer.

Power comes from a pair of 2,448hp Caterpillar 3516C diesel engines for a top speed of 17 knots, while the total fuel capacity of 160,000 litres will allow for a transatlantic range of 5,000 nautical miles when trimmed back to 12 knots. Naiad zero-speed stabilisers will ensure a smooth cruising experience.