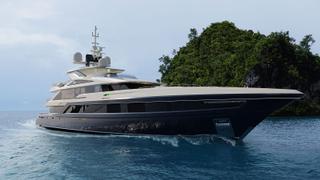 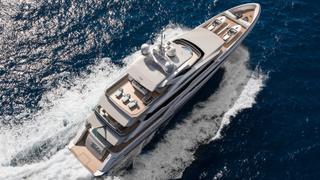 The yard also gave an updated delivery date in Monaco, which is set for the fourth quarter of 2021. The three-deck yacht was designed inside and out by Miami-based studio DeBasto Designs.

The yacht packs an "extraordinary" 720GT volume into her length, according to the Turkish shipyard, with an owner's suite and VIP forward on the main deck and four further guest suites on the lower deck.

“With Tala’s enormous volume my objective was to make the exterior less bulky and give a feeling of a forward dynamic movement, rather than a static feel,” said designer Luiz DeBasto. “I wanted the design to show movement and purpose from any angle. I achieved this with the long ascending line from the swim platform all the way up to the mast and down to the pilothouse windshield.”

Turquoise says the interior design is "sophisticated but practical as well as elegant and comfortable". Large windows promise a light, bright feeling inside with semi-precious woods and materials providing contrast.

A beach club, complete with sauna, gym and dive store, opens on to the big swim platform, which features a lowering section to give easy access to the water. At the top of Tala, the sun deck is set up for all-weather use with a considerable hardtop covering a bar and BBQ, forward of which is the spa pool.

The captain is quartered behind the wheelhouse, with the rest of the crew on the lower deck in five double cabins and one single. Turquoise says crew circulation throughout has been kept completely separate from guest areas.

Powered by twin Caterpillar C32 1,300hp engines, Tala is expected to reach a top speed of around 15 knots. Started on spec, the yacht is now for sale.

Broker Cristian Schwarzwälder previously said Project Tala is set to raise the profile of the yard.

"The 53 metre will certainly push the level of recognition to a new height due to her unique six cabin layout and beach club concept," he said.