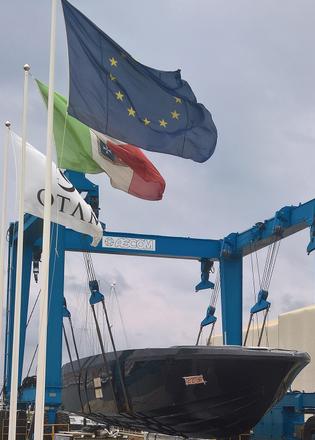 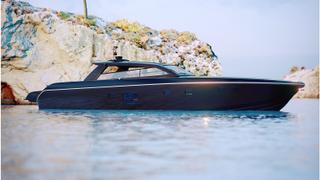 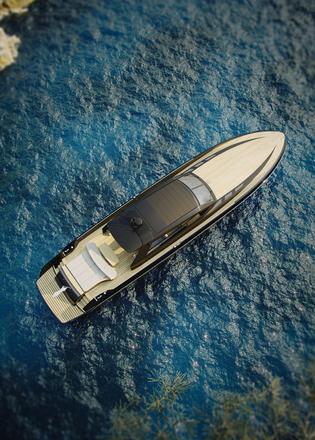 The Italian yard revealed that the hull and deck had been assembled and MTU 16v M 94 engines installed at the end of September.

The yacht's electrical and hydraulic systems are in progress while work is also well underway on the interior manufacturing.

Manufacturing has also begun on the yacht's custom hardtop. The yard revealed it had constructed a 1:1 mock-up of the structure and curved windscreen that will be used to create the mould.

Sales and communication manager Matteo Belardinelli explained: “The aesthetics of the hardtop and windscreen are extremely important for the owner. So instead of relying on 3D modelling, we decided to build a mock-up out of wood to get the proportions exactly right."

Construction remains on track, the yard said, with the yacht's delivery scheduled to take place in time for the 2019 summer season. The yacht will make her international debut at the 2019 boat shows.

The all-new project, which was sold in May this year, features interior and exterior design detailing by French architect Joseph Dirand.

The yacht will feature ample al fresco lounging space fore and aft and include an open transom leading down to a swim platform. A semi-open fly deck will also provide seating and dining facilities.

The owner was drawn to the futuristic, supercar-inspired profile of the Otam 85GTS and requested the Italian shipyard to create a classic, open version designed to suit his personal style.

The Otam 85GTS will have the performance to match its sporty styling, with a twin 2,600hp MTU 16V set-up for a top speed of 45 knots and cruising speed of 38.

The new build Otam 85GTS features a number design solutions and customisations that set it apart from others in the Otam fleet. The aesthetics are unique, but certain elements have been preserved to maintain the Otam DNA.

Belardinelli previously said, “The experienced owner comes from series production boats and was looking for a yacht that could be tailored to his individual needs and sense of style."

Other options on the Otam 85GTS include a choice of foredeck layouts — owners can opt for either a spacious sunbathing area or a lounge and coffee table. Back aft, the emphasis is firmly on relaxation and socialising, with a wide open stern providing easy access to the water and plenty of spots for soaking up the sun.

Accommodation on board the Otam 85GTS is for up to six guests split between three cabins, while the crew quarters is suitable for a staff of two people.