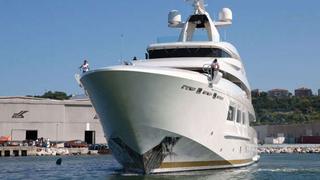 CRN, the Ferretti Group's custom yacht building division, has announced that its 61m superyacht Saramour has been delivered and left the dock of the CRN shipyard.

The steel-and-aluminium superyacht is designed inside and out by Francesco Paszkowski. CRN's Technical Department is responsible for her naval architecture. Official delivery took place on 26 May, and the plans will see the 61.3m superyacht Saramour – formerly known as CRN hull No 133 – cruising in the Mediterranean this coming summer.

Hull No 133 was launched by CRN in early March 2013, and she stands out from her predecessors as the first CRN built on the 60m platform to feature an extra deck between the upper deck and sun deck. CRN is calling this a fly deck, and on Saramour this space is being utilised as a spa and well-being lounge, hosting a gym and hammam. The captain's cabin also enjoys a view from the top on this deck. The sun deck is a smaller affair, which hosts a spa pool, shielded from the elements by a windscreen.

Saramour also has an entire deck dedicated to her owner, which hosts the owner's suite, study, private spa pool, skylounge and table set aft for al fresco dining. In total, 12 guests are accommodated along with 15 crew members.