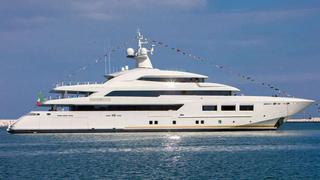 CRN, the custom division of the Ferretti Group, today launched its new 61 metre megayacht, CRN hull No 133, in a private ceremony in Ancona, Italy.

The Italian yacht builder specialises in custom superyachts from 40 to 90 metres in length. The new steel-and-aluminium superyacht features exterior and interior design by Francesco Paszkowski in collaboration with the CRN Technical Department, which was responsible for the naval architecture, and the CRN Design Department. She measures in at 61.3m length overall with a 10.2m beam.

Hull No 133 is the first 60m from the yard built to this design, and she also stands out from the other CRN 60m yachts with the inclusion of an extra deck between the upper deck and sun deck. This 'fly deck', as the builder calls it, is utilised as a well being suite with a fitness area and hammam, and there is also a captain's cabin, well-positioned on this high-flying perch. Above this, the petite sun deck hosts a spa pool protected by a glass windscreen.

CRN 133 features a deck dedicated to the yacht's owner. This owner's apartment features an owner's suite, study, a spa pool set forward, a skylounge and a large table on the aft upper deck for al fresco dining. The luxury yacht hosts 12 guests with a main deck VIP stateroom and three VIP double staterooms on the lower deck; all guests staterooms have en suite bathrooms. She also boasts accommodation for 15 crew members. At stern, the large hatch opens to reveal a beach club, and two large garages, set before the engine room, hold two tenders.

Twin Caterpillar 3,512 engines will power her to a maximum speed of 15 knots and a cruising speed of 14 knots. The CRN 133 superyacht will remain in the shipyard through April 2014 undergoing technical tests and having the interior fit-out before being delivered to her owner.

Even with this superyacht leaving her shed, CRN remains busy. Five other vessels are underway at the yard, including three steel and aluminium megayachts: the 74m CRN 131, designed by Studio Zuccon International Project; the 73m CRN 132, designed by Omega Architects; the 55m Nuvolari-Lenard designed CRN 134; along with the Ferretti Custom Line CL 124 and Riva's new flagship, the all aluminium Riva 122 Mythos.