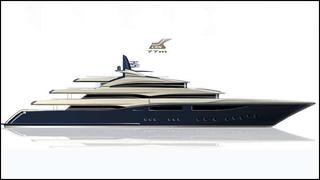 Italian builder CRN has confirmed it's signed a new order on a 77-metre superyacht, as reported in the latest Global Order Book.

The Ferretti Group's custom yacht yard, CRN signed the letter of intent for the construction of a new 77-metre superyacht back in March 2014. At the time it was reported that the new CRN yacht is destined for the Middle Eastern market and is intended exclusively for private use by her owner. Powered by Caterpillar engines, she is anticipated to reach a max speed of 16 knots and cruise at 15.

At the time of signing the letter of intent, Lamberto Tacoli, Chairman and CEO of CRN, said, "I am very proud of the signing of this last letter of intent for a new 77 metre megayacht, another ambitious project for CRN, which allows us to continue to grow. With this in mind, the the 77m project is a new challenge in such a strategic market as that of the Middle East."

CRN also currently has three other new builds on the order book, including 74-metre CRN 131 due to deliver in 2016, 55-metre Nuvolari Lenard-designed CRN 134 due for delivery in 2015 and a 46-metre CRN SuperConero.