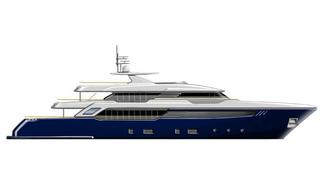 The custom yacht builder, part of the Ferretti Group, specialises in semi-diplacement yachts constructed in steel and aluminium ranging from 40 to 90 metres. Just two weeks ago, CRN signed a letter of intent for the construction of a new CRN 68m superyacht for the Chinese market. The new 44m yachts are intended for Middle Eastern and European owners.

Inspired by the SuperConero, CRN's historic line from the 1970s, the new yacht are called project SuperConero 44m and are displacement, steel-and-aluminium megayachts with a bulb. Designed by Zuccon International Project with project design by CRN engineering, the yachts have a beam of 8.6m and a gross tonnage of 500GT.

Innovative features include a balcony that can be enjoyed while underway and a floodable garage for the tender, which was introduced aboard CRN's 2013 launch the 60m superyacht J'Ade. The SuperConero 44 will be built to RINA and MCA standards and offer transatlantic range.

CRN currently has six vessels in build. The CRN 60m is scheduled to be launched March 1, and five other vessels underway include the 74m CRN 131, designed by Studio Zuccon International Project; the 73m CRN 132, designed by Omega Architects; the 55m Nuvolari-Lenard designed CRN 134; along with the Ferretti Custom Line CL 124 and Riva's new flagship, the all aluminium Riva 122 Mythos.