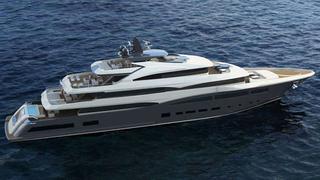 CRN, a brand of the Ferretti Group has announced that a Chinese client has signed a letter of intent (LOI) for a 68m superyacht, the largest sale by the Group in the Chinese market to date.

The LOI was signed on 14 January in Weifeng, China in front of representatives from the Weichai Group, CRN and Ferretti Group.

‘The signing of our first LOI for 2014 with a Chinese client is not only something to take pride in, but also a true witness to the strategic path we have embarked on,’ comments Lamberto Tacoli, chairman and CEO of CRN. 'The conquest of new markets, and above all that of the Asia-Pacific basin, is indeed a short-term fundamental objective for the brand, which will be pursued as we continue to invest in our assets: design, innovation, craftsmanship and the Made in Italy brand.’

The fully custom 68m yacht, designed by Zuccon International Project features a floodable garage, which allows the tender to enter the water without using a crane. This feature was first showcased by CRN at the Monaco Yacht Show on J’Ade, a 60 metre a yacht; however this is the first time they have rolled this element out on a larger yacht.