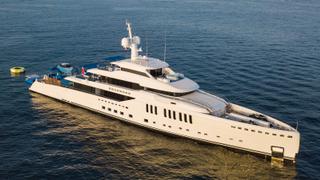 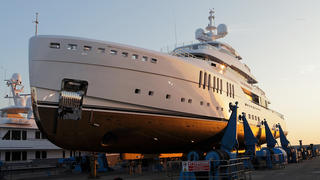 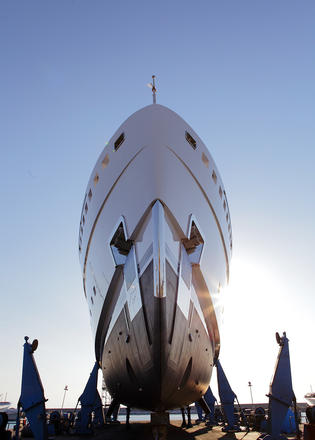 The 67 metre custom yacht Seasense has been pictured for the first time since she was completed by Benetti and handed over to her owner. As the aerial image below shows, she is now in full-on entertainment mode with a wide array of superyacht water toys laid out by the transom and a pair of Jet Skis nestling on the bow.

This groundbreaking project marks the first time that Benetti has worked with the experienced owner. Exterior designer Cor D Rover is also celebrating his first Benetti collaboration, while the interiors come from the Los Angeles-based studio Area — which is making its debut on the superyacht scene.

Built to Lloyd’s Registry standards from a steel hull and aluminium superstructure, Seasense boasts a total interior volume of 1,175GT. Her vital statistics include a 10.8 metre beam and a maximum draught of 3.2 metres. Accommodation is for 12 guests in six cabins, while the crew quarters allows for a staff of up to 14 people.

The owner’s brief called for a design that emphasises the yacht’s relationship with its environment. To this end, the outdoor relaxation areas have been made as spacious as possible.

Key examples of this include the superyacht spa pool on the main deck aft, which is surrounded by sunlounging space. Moving forward large sliding glass doors provide seamless access to the main deck saloon. A second spa pool is situated on the uppermost deck, forward of a large skylounge.

Power comes from a pair of 1,850hp Caterpillar 3512C engines for a top speed of 15.5 knots. When trimmed back to her cruising speed of 12 knots, Seasense will boast a maximum cruising range of 5,000 nautical miles, drawing on a total fuel capacity of 130,000 litres.

Other superyacht projects currently under development at the Italian yard include the 49.8 metre Project Blake, the 63 metre Project Balance and the 69 metre Spectre, all of which are due to hit the water next year.