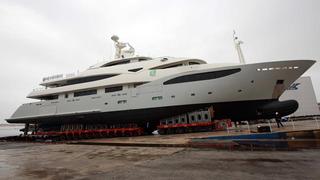 On Monday, we released the news of the double launch at CRN this week, the Navetta 43 named Lady Trudy and the 60m Hull 130. With an official launch scheduled for tomorrow, the Hull 130 already left her shed, and we're pleased to display the first pictures of the yacht.

Sister of Blue Eyes and Hull 128, respectively launched in 2009 and 2010, Hull 130 is easily distinguishable thanks to her cream paintjob.