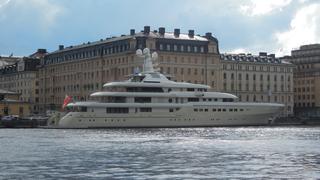 A fundraising campaign has been set up to help the crewmember who was severely injured after an accident on board 81.80 metre superyacht Kibo last year.

Jacob Nicol, 23, was working on board the Abeking & Rasmussen yacht in Mallorca on May 3, 2015 when he fell into the water and struck his head.

Nicol was recovered from the water by divers on board Kibo and taken to a nearby hospital, but the accident left him with severe brain damage. He has since been moved to the Hunters Moor Neurological Rehabilitation Centre in Birmingham where he communicates with doctors and his family via a clicker.

Fellow Kibo crewmember Courtney Shore, 22, hopes to raise £7,000 so that Nicol’s family can buy equipment that will track his eye movement and allow him a greater range of communication.

“From day one we were told Jacob would never make the progression which he has today,” Shore said. “He is now able to answer questions correctly by using a clicker, communicate with his eyes, move parts of his body very slowly and make noises. It is truly amazing to see how far he has come against all the odds.”

To raise money, Shore is planning a five-day Peruvian trek through the Salkantay Pass to Macchu Picchu. The trip is entirely self-funded and all sponsorship money raised will go directly to Nicol’s rehabilitation.

The level of financial compensation for Nicol and his family is dependent on the outcome of an investigation by the Maritime Authority of the Cayman Islands, which is still ongoing.