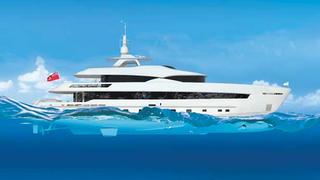 Dutch companies Heesen Yachts and Van Oossanen Naval Architects have released the specifics of a 42m with a patented foil assist, which could dramatically reduce resistance.

The announcement, made at the Monaco Yacht Show, follows Van Oossanen’s 2010 Fast Displacement Hull Form development, which Heesen snapped up for a 65m now well along in build.

Van Oossanen says the foil assist, called a Hull Vane, will reduce resistance by 24 per cent at maximum speeds and achieve an average 18 per cent reduction of drag across the speed range. The device is positioned in a specific location well aft below the hull of a ship or yacht, by means of struts or sponsons. It delivers a thrust force and changes pressure distribution on the hull, thereby reducing resistance. It extends laterally across the beam and does not affect the maximum draught as the position is higher than that of the propellers.

Computer studies for a number of displacement motor yachts predict fuel savings of up to 25 per cent. This led Heesen Yachts to sign a licensing agreement for the application of the Hull Vane to its displacement motor yachts, beginning with the 42m with a 9m beam. It is scalable, however, and Piet van Oossanen says he has carried out a study on its effect on the world’s largest container ships, on behalf of Maersk and Hyundai.

The exterior lines are by Frank Laupman of Omega Architects. Laupman’s bow design includes a ‘knuckle’ halfway up the bow adding dimension in the living area without distorting the length-to-beam ratio – another important item for hull efficiency.

This innovative Heesen already has an owner and is due for delivery in 2014. Owners of Hull No.1 have one upper deck master with a gym and a second on the main deck forward, with a starboard balcony, a studio and a large walk-in wardrobe. Continuous windows increase the feeling of proximity to the ocean.