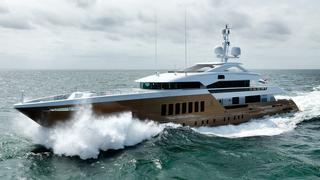 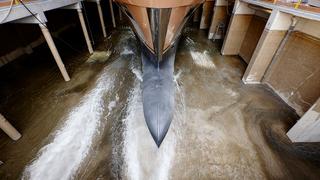 Heesen delivers Azamanta, the first of its kind

Heesen Yachts has delivered the world’s first fast displacement steel-hulled yacht larger than 50 metres LOA. The 55 metre yacht was launched and christened Azamanta during a private ceremony at the Heesen shipyard in Oss, The Netherlands, in May and was delivered to her owner today (July 10).

Built to meet the owner’s brief for a yacht to travel the world with family and friends, Azamanta has an ice-reinforced steel hull. She also stands out with a gold-hued hull colour.

Heesen sold its first 55 metre FDHF yacht, hull No YN 17255, in February 2013. The new yacht was conceived to increase performance while reducing an environmental footprint. With the FDHF, she is designed to go faster than steel yachts in her class, but also to burn up less fuel and achieve a greater range and speed.

According to Heesen, she “sets a benchmark for efficiency” – Azamanta will propel her 600 tonnes mass at 15 knots using only 600kW of power. She will reach top speeds of 16.5 knots with a range of 4,500 nautical miles cruising at 13 knots.

As Azamanta will be used to explore around the world, she has been designed with a focus on uninterrupted views. Her exterior lines are by Omega Architects, who have given the yacht a plentitude of vertical windows and glass bulwarks to let light flow in. Working with Heesen’s in-house team, Omega also intelligently engineered the superstructure to be entirely free of pillars so there are uninterrupted views of the sea and surroundings beyond.

Azamanta also boasts massive outdoor living spaces, such as the 110 square metre sun deck, which is decked out with custom furniture. The Jacuzzi can be concealed with a rigid cover and convert into a stage for live performances; accompanied by a high-fidelity sound system, this transforms the sun deck into the ideal party venue. The owner also enjoys a 70 square metre private terrace forward with a six-top dining table for privacy when the yacht is moored stern-to in port.

Sinot Design has styled the interior, which is inspired by the owner’s passion for Metropolitan-style art deco and his love for nature. This plays out with an interesting contrast of dark patterned wood, light silks, custom designed fabrics and art deco décor that blends to create a welcoming atmosphere.

The master suite, set on the main deck forward, features a recessed balcony. Ten more guests are accommodated in en suite staterooms on the lower deck.