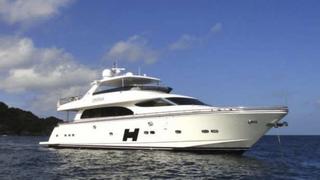 Horizon is delivering two new boats to US customers, an according to the builder's Twitter feed.

Photos on the Horizon Yachts Twitter feed show the P110 and Horizon E84 being loaded onto the deck of a cargo ship in Taiwan, where the boats are manufactured, ready for transportation to the USA.

The RP110 is the smallest in Horizon’s tri-deck range. The 33.53 metre boat has a seven-metre beam, which allows space for a large skylounge and spacious accommodation below decks for up to 20 people including crew.

The E84 is the second biggest yacht in the builder's extensive E range, which allows significant layout and design customisation in a LOA of 25.91 metres and 6.10-metre beam. The boat comes in open bridge, skylounge and fishing cockpit guises.

It’s been a busy few months at the Horizon factory, after a third Horizon RRP110 raised pilothouse superyacht, Paradise, was launched in November. Horizon launched the second RP110 superyacht Carnival Liberty 3earlier in the year.