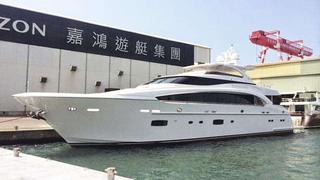 The third Horizon RRP110 raised pilothouse superyacht has been launched in Taiwan.

The 33.5 metre superyacht is undergoing sea trials with the new owner, who is a first-time Horizon owner, before being shipped to her new berth in Perth, Australia, towards the end of this month.

Paradise boasts the same distinctive raised pilothouse design as her sister ships, as well as a double chine hull for extra stability and a 1.83 metre draught, making her ideal for cruising in Australia's shallow waters. An additional feature incorporated for cruising in Australia is the Muir windlass system, which claims to offer a stable grip and "higher-quality anchoring".

Horizon also ensured that the hi/lo swim platform on Paradise is lightweight and, per her owner’s request, can extend out to 12 feet 2 inches, with a load capacity of 3300 pounds for a custom tender. The boat has zero speed stabilizers, bow and stern thrusters offering 55hp each and is powered by twin CAT C32A 1900hp engines.

JC Espinosa and Donald L Blount were responsible for design and naval architecture respectively, as they were for the previous two RRP110 projects.

Among the many features specified by the owner was a "beach club" area aft, with storage cabinets, a televsion and hydraulic garage door that opens to the swim platform. The aft deck itself has a large semi-circular dinette and seating to accommodate guests. On the main deck, the main saloon boasts a large L-shaped sofa and "love seat", as well as a formal dining area which accommodates eight to 10 guests.

Paradise's layout has really been customized to suit the owner in accommodating friends and family onboard and she features a five stateroom layout, with an on-deck master and four guest staterooms below deck, similar to hull two, but with her crew quarters aft, like RRP110 hull one.

Another personal touch, different to the previous two hulls, is a walk-in closet and hanging locker space off the master bathroom. Meanwhile the four guest staterooms have added walk-in closets and there is a different head configuration for the port twin stateroom.

Working with Horizon’s in-house designers, the owners chose South American walnut in satin finish as their main wood, with accents in high-gloss ebony, providing a contrast to the light, soft goods and décor used in much of the upholstery.

The flybridge on Paradise is similar to hull two but has larger seating areas on both port and starboard sides to accommodate up to 20 guests.

The crew quarters, also specific to this boat, sees the two crew cabins and mess on the port side, with the captain's quarters to starboard. Crew access is via the saloon.

The first RP110 motoryacht launched by Horizon was superyacht Andrea VI, who was tailored to her experienced owners in America. She features four staterooms with a country kitchen and a full-beam master on the lower deck. She is powered by twin 1,935hp Caterpillar engines and can reach a top speed of 23 knots.

Horizon launched the second RP110 superyacht Carnival Liberty 3 earlier this year. Unlike Andrea VI, she has five staterooms in total with an on-deck master suite. Powered by twin 1,900hp Caterpillar engines, she has a cruising speed of 18 knots and a maximum speed of 22 knots.

"The new Horizon RP110 superyacht has enjoyed global success since being launched last year,” said Horizon CEO John Lu. “Hull one ,Andrea VI, was delivered to her second-time Horizon owners in November 2013, and hull two delivered to her owner in Asia. Hull three ,PARADISE, is definitely another notable launch for Horizon, as she is the largest yacht we have sold into Australia.”

He revealed Horizon is in contract negotiations for RP110 superyacht hull four. “Our clients around the world have been and continue to be impressed with the RP110, not only for her design and performance but also because she offers immense layout flexibility," said Lu.