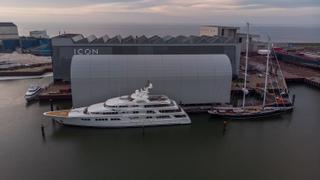 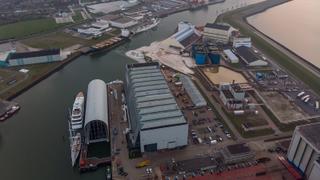 Dutch yard Icon Yachts has released new images of its in-build extended refit facility, which is nearing completion and expected to be in operation by the end of the year.

It comes after construction began on the facility in July after Icon’s shareholders voted to build a new floating shed to accommodate a surge in refit projects coming to the yard.

When complete, the floating shed will measure 130 metres and be equipped with up to 28 metres of mast clearance. The new facility will increase Icon’s refit capacity by almost 100% and will allow the yard to take on bigger projects.

Icon previously said it was inspired after talking to a captain of “one of the most prestigious yachts in the world” who claimed captains "always prefer to stay in the water.”

“That is why a floating dock for refits makes sense,” the yard said.

The yard added that the new facility will allow it specifically to take on more North European builds and make sure that refit projects are completed “on time and on budget, no surprises”.

The news came as the Dutch yard revealed it has recruited more than 25 new employees over the past year and had over 300 metres of yacht projects underway.

Recent refit launches undertaken at the yard include the 82 metre Abeking and RasmussenSecret, 67 metre LurssenGlobal and 62 metre FeadshipVirginian.