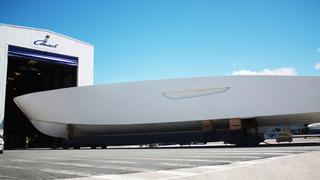 French yard Couach used the occasion of the Cannes Yachting Festival to announce that it has begun construction on the seventh hull in the Couach 3700 flybridge series.

Currently known as Project 3707, the new 37 metre yacht was extracted from its mould in Gujan-Mestras earlier this summer, as the image below shows.

Designed in-house and being built on speculation, Project 3707 features a five-cabin layout, giving accommodation for up to ten guests as well as five crewmembers in three further cabins. This decision was taken to ensure she has the maximum potential for both chartering and private use, according to Couach.

The next construction stage is to install the engines and the mechanical systems, and the project is on schedule for a summer 2018 delivery. Despite this, the yard insists that there is plenty of room for an owner to come in and put their stamp on the yacht, with several interior design and fit-out choices yet to be made. Preliminary sketches suggest a sober and neutral interior décor, but this is very much up for discussion.

Power will come from a pair of MTU M90 diesel engines that will allow for a cruising speed of 24 knots, topping out at 28 knots. Meanwhile, the superyacht garage will be large enough to house a Jet Ski and a five metre tender.

Walter Ceglia, president and CEO of Couach, added: “The strong appeal of the Couach 3707 has already attracted strong interest, but the doors of opportunity remain open for potential buyers.”