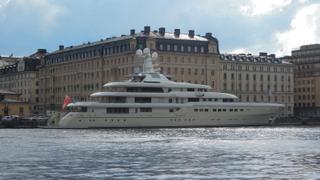 Incorrect working practices on board the 81.80 metre Abeking & Rasmussen yacht Kibo (now named Grace) led to the severe injuries of a crewmember who later died, an investigation has found.

Jacob Nicol was cleaning the rub rails of Kibo in Mallorca on May 3, 2015 when he fell into the water, hitting his head on a 5.5kg fender hook and sustaining a skull fracture.

He was recovered from the water by a diver on board the yacht, who found him “face down on the seabed” but by that time had spent more than 13 minutes underwater. The consequent starvation of oxygen left Jacob brain damaged and severely disabled.

He died just over two years later, on June 7, 2017, as a result of a chest infection caused by his immobility.

Now an investigation into the incident, undertaken by the Maritime Authority of the Cayman Islands, has ruled that the incident occurred because the yacht’s safety procedures were not followed.

These included the fact that Jacob was not wearing a lifejacket or buoyancy aid while working over the side, a requirement stipulated in the yacht’s Standard Operating Procedures and Technical Manual.

There was also no separate lifeline in use, which meant Jacob was not attached to a fixed point of the yacht’s structure while he worked. The investigation also noted that the incident was not captured by any of the 14 CCTV cameras on board Kibo because Jacob was working outside of the motion detection zone.

The conclusion of the investigation was that the most likely cause of the incident was Jacob losing his footing and falling into the water while repositioning the fender hook.