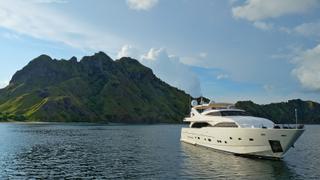 Proposals to scrap Indonesia’s luxury goods tax could see more superyachts sailing into Indonesian waters than ever before. The Indonesian government is currently considering plans to do away with the tax in an effort to boost the country’s tourism trade, Indonesia Investments reports.

According to Indonesia Investments, the removal of the tax could rocket the country’s annual foreign tourism income, from IDR 3 billion (£160,000) to IDR 6 trillion (£160 million).

Captain Jimmy Blee, of superyacht agency Asia Pacific Superyachts in Indonesia, welcomed the proposal. “If this goes through it will be great news for visiting superyachts and other vessels,” he said.

Despite the difficulties, many of the world's biggest superyachts have been spotted in the country, including Hemisphere, the world's largest sailing catamaran.

This is not the first time the country's luxury taxes have been targeted to enable economic growth. In 2015, Widodo scrapped the luxury taxes on a number of goods, including electrical appliances and branded clothing, in an attempt to boost consumption.