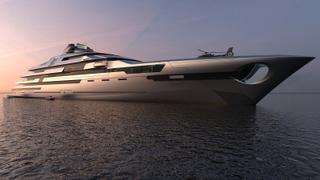 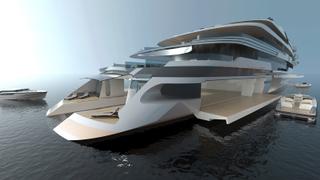 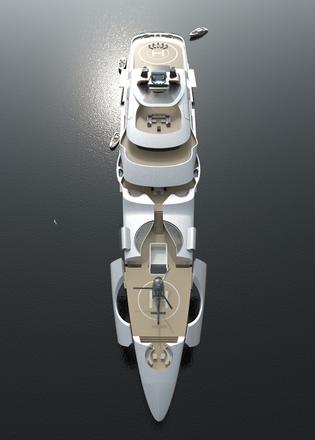 Yacht designer Ken Freivokh has revealed his latest concept for a 140 metre superyacht. This spectacular design places an emphasis on flexibility and premium features, such as a retractable helicopter hangar and an observation bubble built into the bow for panoramic sea views.

Accommodation is for up to 20 guests split between ten staterooms, including an upper deck master suite, complete with its own study, cinema room and a secret elevator, leading to the owner’s private lower-deck delicatessen.

Communal areas include a fully certified IMAX cinema, upper-deck gentleman’s club and main-deck saloon, which benefits from a fold-out balcony and a rotating dining area.

Out on deck, guests can soak up the sun in the foredeck waterfall pool or head to the superyacht beach club, where the swimming pool measures an impressive 13 metres long and can double up as the main tender dock. An adjacent spa, gym and beauty salon make the beach club a real relaxation hub.

Toys and tenders would be well catered for as the design incorporates a side-loading 11 metre tender garage amidships that can hold up to six limousines and beachlanders, while the foredeck locker is dedicated to all the other essential water toys.

Privacy was another key concern, which can be seen through the vertically integrated crew quarters, allowing staff to carry out day-to-day tasks discreetly.

Freivokh is no stranger to the world of large superyachts, having previously lent his expertise to such notable projects as Maltese Falcon, Black Pearl and Euphoria.