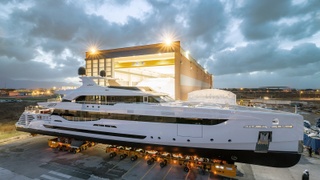 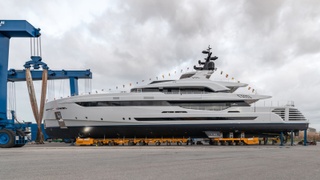 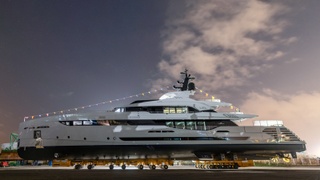 Italian yard Rossinavi has officially launched its 49.7 metre superyacht Lel, previously known as Project FRO38. The motor yacht emerged from the shipyard in Pisa for the first time on January 31 2020, after a construction period that lasted approximately two years.

Lel was designed by Luca Dini and is the first collaboration between Rossinavi and the Florence-based studio. The yacht was sold to a long standing client in September 2017 and is scheduled for delivery later this year.

Discussing his work, Dini explained that “the owner wanted a fast and sporty yacht like the ones that he had previously owned, but this time with larger indoor volumes and more deck space. He wanted something where comfort would be masked by aggressive lines." Regarding the design and construction process, “The owner was very involved and detail oriented", added Dini.

Dini further commented on the design: "The interiors are contemporary and elegant and everything is custom, right down to the light switches. It’s in this kind of work that Rossinavi excels: it felt like we had the shipyard at our fingertips, every wish of ours was their command. It was a very positive build experience.”

Featuring an aluminium superstructure, Lel packs high volumes within 500GT of internal space. She has been designed with huge windows for far reaching views, a vast beach club and an upper sun deck with a swimming pool. Thanks to the use of open spaces on board, Dini described Lel "like an actual terrace overlooking the sea, un pied dans l’eau, where nature meets technology”.

Other highlights on board include a crystal veranda leading out to spacious external deck areas and a private balcony attached to the owners cabin. Despite her size Lel can reach a maximum speed of 23 knots and has a comfortable cruising speed of 13 knots.

Chief operating officer of Rossinavi, Claudio Rossi, described the new motor yacht as: “A good interpretation of the eternal compromise between sport design and the exploitation of the internal areas. This project represents a very good mix of those two contrasting elements that find a new equilibrium in this two deck yacht.”