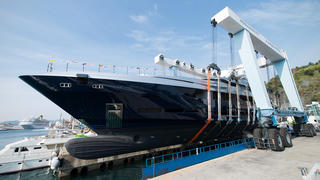 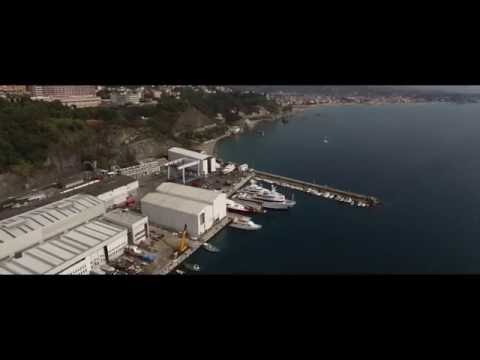 The new Mondomarine flagship yacht Sarastar has been launched in Savona, the Italian yard has announced. This 60.22 metre all-aluminium superyacht features exterior and interior styling by Italian designer Luca Dini.

Following her launch ceremony on September 12, Sarastar will now head to the Monaco Yacht Show, where she will be one of the must-see new yachts at MYS 2016.

Sarastar features a total interior volume of around 900 gross tonnes. She will accommodate 12 guests in a main-deck master suite that makes full use of the 10.5 metre beam, plus five double staterooms on the lower deck.

Dini worked with interior designers Silvia Margutti and Gabriele Tartaelli to create a balanced and harmonised decor that uses precious and unconventional materials. These include white onyx, exotic marbles, crystals and semi-precious stones, as well as silver and silk custom wall coverings.

A key centrepiece on board Sarastar is a glass sculpture by Italian artist Lorenzo Malfatti, which encloses the spectacular superyacht staircase.

One distinguishing exterior feature of Sarastar is the foredeck, which can be used as an enclosed superyacht tender garage, or opened up to create a sunbathing space, helipad or dance floor.

The designers were keen to create a strong link between all three decks and to that end a series of triple skylights allow light to flow from the sun deck down to the beach club, via the aft deck.

Dini’s sleek and sporty exterior design of Sarastar reflects the efficiency of her semi-displacement hull, which has been developed in-house by the Mondomarine engineering team. Her twin 3,860hp MTU 16V 4000 M73L engines will allow a top speed of 19.5 knots, a cruising speed of 18 knots and a range of 4,100 nautical miles at 12 knots.