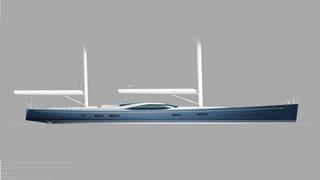 The twin-masted 150-footer is the latest addition to Doyle’s fast-growing portfolio after he took over the entire Ron Holland operation in March last year.

Doyle worked on some of Holland’s biggest projects over the past 18 years including ground-breaking superyachts Mirabella V, the world’s largest sloop, and Ethereal, renowned as one of the most technically advanced boats afloat. Doyle was also Holland’s right hand man when the studio put out the 64 metre aluminium ketch Felicita West and the Perini Navi series which has seen 23 yachts delivered to date.

When Holland moved to Canada in 2013 Doyle rebranded the operation, based in Kinsale, Ireland, and now has a portfolio of four motor craft, encompassing superyacht tenders and explorer vessels, and five sailing craft, ranging from a 10 metre Weekender to a 50 metre performance cruiser which the studio drew with Van Geest Design for a client earlier this year.

Doyle says his latest hull will offer speed and comfort underway, with the beam carried well aft to allow a fine entry at the bow and yet roomy living quarters. ‘The hull form features a chine that carries the beam far outboard,’ says the 42-year-old designer, ‘to give best form stability coupled with a hydrostatic spray rail that aims to keep the wetted surface to a minimum.’

‘The combination of a sleek profile, balanced shearline and a plumb bow allows the hull to take full advantage of the longest possible waterline,’ says Doyle. ‘Careful design on the run aft allows the boat to float dry in light airs, reducing the wetted surface area but soaking up the waterline length when needed for best upwind performance.’

He predicts ‘exceptional’ offwind performance with a twin rudder configuration and high stability overall allowing the owner to take full advantage of the powerful sailplan, rigged around a 52.7 metre mast.

Why a ketch? Doyle explains he has his eye on the Bucket Regattas series and the demand for ever more performance from what is essentially a cruising yacht, with systems and a rig that are easily handled. And he has an interesting tip for those seeking a performance advantage. ‘Often overlooked, but the extra undervalued area and weighting of mizzen staysails can give ketch rigs a nice advantage in this style of friendly competition,’ says Doyle.

With cruising in mind, the 285 ton yacht has a vertical lifting fin and bulb keel, draft ranging from 3.8 metres to 9 metres, to allow access to shallower waters. As well as a master cabin there are four guest cabins and four crew cabins.