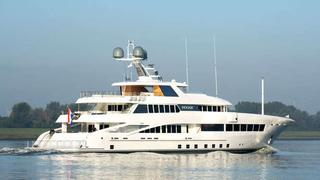 The 60.35 metre superyacht was launched in September by the Dutch builder. The vessel was built in close conjunction with the owner, an experienced boater who had chartered Feadships prior to the build.

Feadship Director Henk de Vries has said of the boat, ‘This is the epitome of the Feadship experience, which encompasses the entire design and construction process. Rock.It is a true 21st-century Feadship.'

The interior and exterior styling is by Sinot Yacht Design, who told Boat International at the time of the launch, 'A natural flow of lines and surfaces makes the yacht breathe speed and exude elegance.'

Rock.It's 10.8-metre beam allows for a comodious interior and she accommodates 10 in an owner’s stateroom and four guest cabins. There is also accommodation for 12 crew members on the lower deck.

The superyacht also boasts a cutting-edge, military-specification manoeuvring system which among other things allows her to maintain her heading at anchor, hovering on the main engines and thrusters.