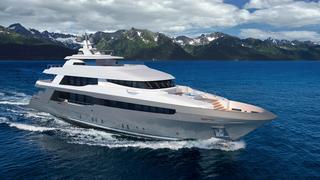 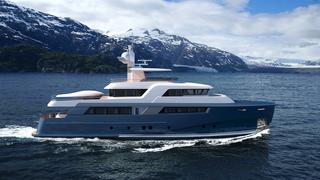 Building stalled at Crescent after the company was sold to an investment group in the early 2000s. At the same time, Tim Charles started Platinum Marine, taking over the Crescent facility and specialising in refit work.

Jack Charles started Crescent Beach Boatbuilders in the late 1980s, with the name later changing to Crescent Custom Yachts in order to reflect the builder’s move to creating custom luxury yachts. When Tim Charles took over the languishing yard and started Platinum, he maintained the core craftsmen who previously worked at Crescent.

“I saw an opportunity to bring Crescent Custom Yachts back to life by utilising the capabilities of our exceptional craftsmen,” says Tim Charles. “Crescent is a collaboration of the talents of these people and others who have worked at some of British Columbia’s best shipbuilders such as Rayburn Yachts, McQueen Yachts, Richmond Yachts, Queenship, and West Bay Yachts. We are fortunate to have the best craftsmen available in the Pacific Northwest and it will show in our projects.”

Tim Charles’ goal for Crescent Yachts is to “restore the brand to its former glory with a focus on elite custom vessels with exceptional craftsmanship.”

Crescent Custom Yachts will now restart work on the Crescent 145, which features interior and exterior design by Seattle-based Jonathan Quinn Barnett and hull design by Jack Sarin. Fraser Yachts sold the part-built Crescent 144 (now called the 145) superyacht in July 2014. The fibreglass built yacht will be Lloyd’s classed and is being completed for an American client. The hull for a Crescent 115, an explorer yacht by Jonathan Quinn Barnett, is also at the yard awaiting customisation and completion.

Also in the works for an American owner is a Crescent 110, with exterior design by Luiz de Basto of Miami. Crescent reports that a Crescent 155 yacht is in the design phase for clients as well.

Made in America, Invictus is designed for world domination