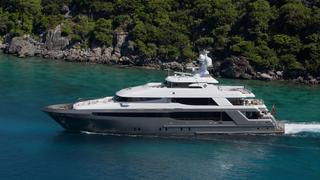 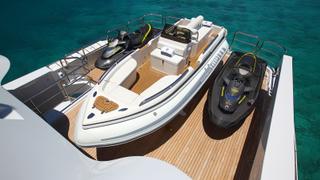 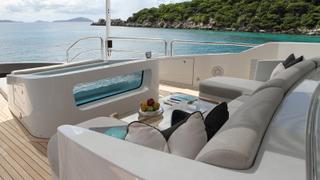 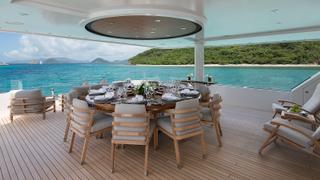 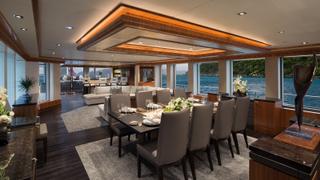 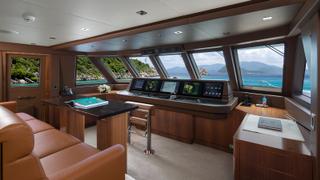 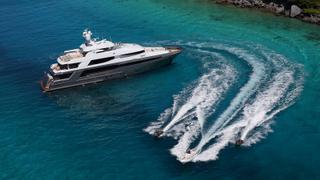 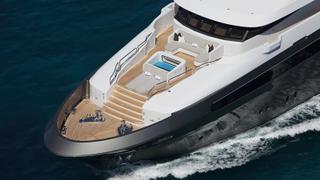 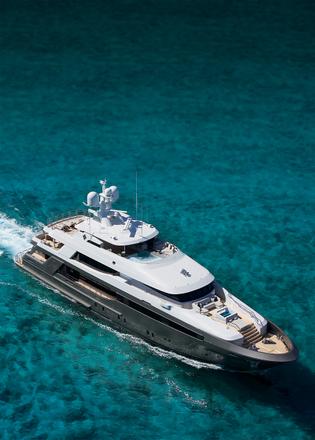 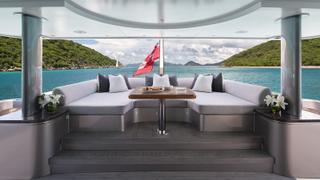 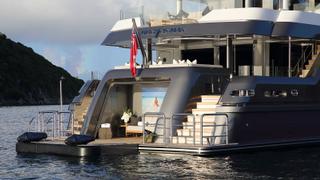 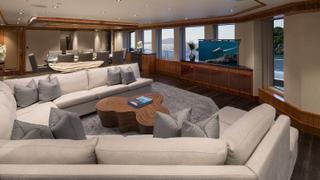 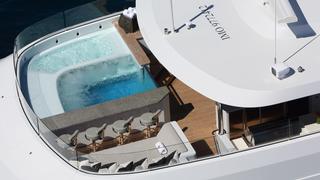 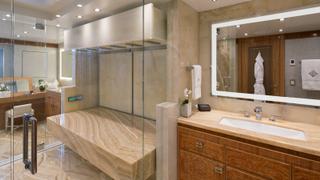 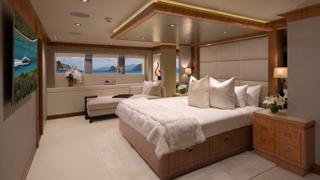 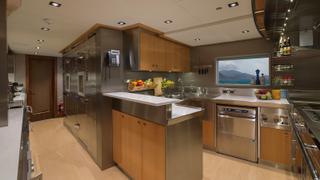 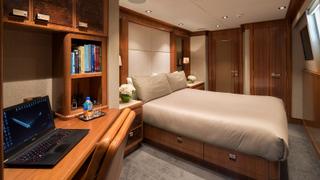 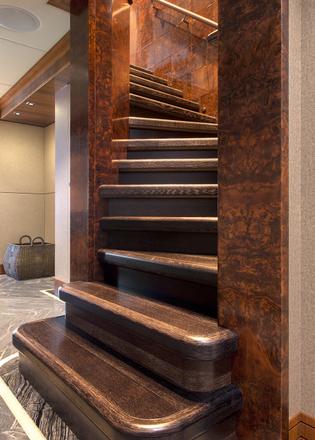 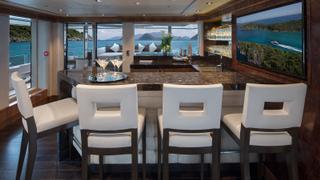 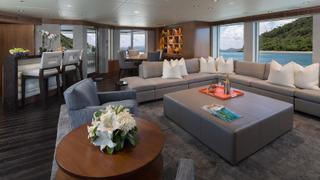 This surprising saga begins nine years ago, when the Seattle-based yacht designer Jonathan Quinn Barnett was hired to create the lines of a new model for the international market, a large volume 42 metre with modern styling and ample amenities.

The basis for the hull would be a semi-displacement design by fellow Seattle naval architect Jack Sarin that had been a successful platform for Crescent Beach Boatbuilders of British Columbia.

As Barnett explains: “Rather than split the mould in half and add a wedge to the middle for more beam and graft on a few feet at the back, as many yards were doing to go bigger and which often results in a blunt bow, we did a full study resulting in reshaping the bow for a finer entry and performing a tank test. The result of the testing showed the hull would do 23 knots with the planned power.” They proceeded with the project.

“They” was a Canadian investor outfit that had purchased the name and assets of Jack Charles’s well-known Crescent Beach Boatbuilders, which included that Sarin hull mould, when Charles retired. But, not having bought the Crescent Beach property on the Fraser River, they did not have the space to lift a 42 metre boat.

Here the story takes a funny turn. They subcontracted Charles’s grandson, Tim Charles, to build the hull at his company, Platinum Marine, in Richmond, BC, where there was a skilled core of craftsmen, many from his grandfather’s yard. After the completed hull was barged up the river, the company began installing systems and built the deck and part of the superstructure.

Then came the global recession and the investors with the partially built boat were in the wrong place at the wrong time. The project was mothballed; bankruptcy ensued. The concept was advertised for sale in 2014 and Fraser, in California, was tasked with finding a buyer for the hull.

It just so happened that Fraser in Florida was managing a 35 metre Broward named Muchos Mas (now renamed Acqua) for charter. That yacht’s owner, a Miami-based entrepreneur and philanthropist, was looking for a larger boat. One thing led to another and he decided that buying and finishing the Crescent boat would be his kind of project. He liked the lines and the size. “I knew it would be complicated,” he tells us, “but I thought it was the perfect platform for what I had in mind.”

To size up the project, he hired David Darwent, who has been directing refits and new builds since 1989, to be his representative. It quickly turned from a mere completion to something akin to a new build.

“The real hero of this story is the owner,” says Darwent, who came on board in late 2014. After exploring his options, he engaged Tim Charles, who in the meantime had regained the Crescent trademark, to finish the boat.

It would be the biggest project yet for his yard, which specialises in refits, and a major coup for the reborn Crescent Yachts, renamed Crescent Custom Yachts. The project was barged back down the river.

“As we dug into the project, we quickly realised three things: it was heavy, we didn’t have much documentation and [there were] no engineering studies or weight calculations. We had some drawings stamped by ABS but no class inspections. The owner wanted the boat completed to full commercial Lloyd’s and LY3 certification,” Darwent says.

The first eight to 10 months were all inspection and analysis. “In some cases we found that [while] the previous builder had installed quality equipment, it just wasn’t the right equipment for this boat. For example, the generators and shore power converters were grossly undersized.”

Every mechanical component was inspected, taken apart and updated if necessary to provide the owner with warranties. If it couldn’t be updated, it was replaced. During the build, Charles added some key players to his team including naval architect and engineer Burkay Yilmaz, formerly of Bilgin Yachts in Turkey, to assist the yard’s general manager Scott Hay.

Early in the client discussions, Charles introduced the original designer, Barnett. “They found me still convinced of the value of this project,” Barnett says. “I thought there were a lot of good innovations and cool details in it that were very appropriate to their lifestyle. The new owners are a young family that enjoy diving. We shared enthusiasm for what we could make.”

Which is how Barnett found himself in the enviable position of revisiting one of his designs “with 20/20 hindsight”. When weight and stability calculations questioned the impact that the superstructure as supplied would have on stability, Charles and Darwent realised it would be necessary to jettison much of the unsuitable previous upper works that had been done.

So Barnett asked Darwent if he “could have another go” at refashioning the superstructure to incorporate things in tune with the new owner’s lifestyle. The new structure would be built of infused carbon fibre, reducing weight by around 2.5 tonnes on the sundeck alone. “For example, we took off a 1,500lb [680kg] hot tub and replaced it with one of 600lb moulded in carbon fibre by the yard,” Darwent says.

“The new owners knew they would offer the boat for charter and wanted to add memorable features,” Barnett says. Because there would be a spectacular superyacht sundeck with a spa pool, they saw no reason for a spa pool in the master cabin en suite. Instead it now showcases a high-tech horizontal shower by Dornbracht.

A series of overhead jets pulse waves of water in a programmed pattern over a heated onyx bed for a spa-style hydro massage experience. There are also two showerheads for standard vertical showers. The glass surround on the huge onyx-walled shower area becomes opaque for privacy at the touch of a button.

Light ripples down from overhead through the glass bottom of a spa pool forward on the expanded Portuguese bridge. Of this pool Barnett says: “They wanted an area where they could sun and hang out at the bow so this small pool is more about dangling your feet in or cooling off. It lets an amazing amount of light into the master.”

For the main deck master suite itself, the original design was revised with larger windows given a modern stainless steel surround. It takes full advantage of the Muchos Mas’s 8.6 metre beam with ample built-ins for seating and storage. The light, neutral colour scheme is truly relaxing. “I went into the project with charter in mind,” confirms the owner of Muchos Mas. “I think it’s important to have a resort-type feel rather than a homey or edgy feel. Water is my happy place.”

Between the master suite and saloon is a memorable galley designed and installed by Restaurant Design and Sales, a commercial kitchen supplier in Bellevue, Washington, that Barnett has worked with on other yacht projects. All gleaming stainless steel, it has every conceivable food preparation device plus a herb garden with professional grow lights. The design keeps crew traffic and stewardesses involved in prep or course changes out of the cooking zone. Two doors provide service route options. “Ever since I worked for designer Jon Bannenberg,” Barnett says, “I’ve been trying to follow his guidance to reinvent the traditional GA in some ways that bring surprises. On this boat, the galley and the staircases and various outdoor living areas are some examples of that.”

The lower deck staircase connecting the saloon to Muchos Mas’s guest cabins is impressive with its landing and its dark walnut surround. The VIP can be combined with an adjacent cabin to make a full-beam suite and finely appointed to give near parity to the master should there be two principal charter clients.

Muchos Mas was given a public debut at the Fort Lauderdale International Boat Show 2017.

The indoor saloon and dining area is contemporary, with a casual elegance that many try but fail to achieve. The wide planked floors speak to a holiday home theme while the tweed fabrics, lighting fixtures and wool and silk area rugs are penthouse appropriate. The custom furniture is large and comfortable, inviting guests to kick off their shoes and put up their feet.

By pushing the engine room’s fresh air supply outboard to the fashion plate on the port side, there is room for a large wet bar at the aft port corner of the saloon that has 270 degree views. Its placement keeps it from dominating the room while a sliding window also facilitates service to the aft deck’s outdoor living area.

“Experience with charter guests tells us that sometimes guests like to sit at a bar and look out, but they don’t necessarily want to be out in the weather or out in public view,” Barnett says. “Here they have a view out over the deck to the water or they can see the television and be part of the salon activities.”

Barnett envisioned the aft deck with its raised seating area as a casual patio linking the deck above with the superyacht beach club at the stern below. He used grey Esthec for a small section of the aft deck and a mix of white and shades of grey for exterior cushions and upholstery.

The dark wood stairs lead from the main deck’s entrance corridor up to the bridge deck, making two 45 degree turns en route to land at an oversized lobby area designed to showcase art and offer discreet access to a dayhead. It is another feature that makes Muchos Mas feel larger than its length.

The upper saloon aft is a space for social interaction. The beautiful quarter-sawn oak joinery details introduced on the main deck come to the fore here in decorative mouldings and cabinetry. With such a large interior to fit out, Crescent sought help from a high-end Abbotsford, BC, company called Offshore Interiors.

“The owners wanted contemporary but not cold. We used walnut in some places but also lighter woods. I steered away from flat panels because flat panels amplify sound. Angled panels and mouldings keep the sound from being too bright,” Barnett says.

Because the bridge deck of Muchos Mas is full-beam, the sundeck above is equally massive, with a floor area equal to that of yachts of 50 metres or more. The pool, with its swim-up bar, appears huge but half of it is shallow, with moulded benches for tanning while partially submerged. A waterfall fill adds a soothing sound. Clear glass panels surrounding the sundeck will make it comfortable during early season cruising.

Talking about the number of things that were added to the original scope, Charles notes that he is glad the clients insisted on the highest quality work and components and had such contemporary style. “I’m really proud of the opportunity we had to showcase our joinery. Refit projects don’t always allow us to show craftsmanship. I feel like of all the ways to reintroduce the Crescent brand, I couldn’t be happier.”

“My first charter experience in the BVIs was the best week I’d ever had,” recalls the owner. “I want that for others. That’s what this concept is all about, from the design to the organic food. That’s why we named it Muchos Mas, which means many more — many more memories.”

Muchos Mas is available for charter with Burgess.

First published in the November 2017 US Edition of Boat International.