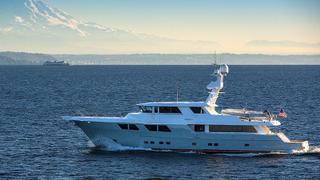 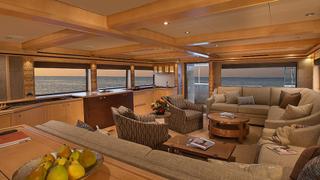 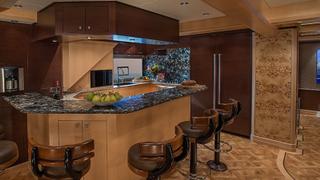 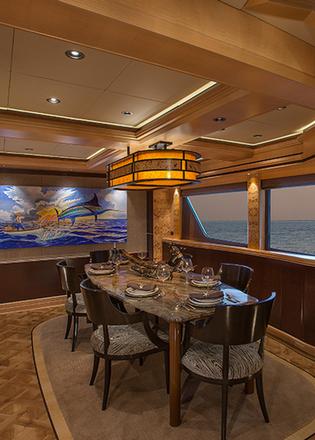 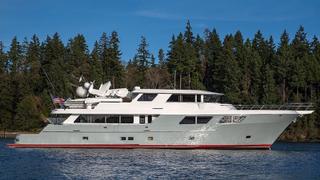 American yard Nordlund Boat Company has delivered its 35.05 metre project, the Nordlund 115 Expedition, which has been named Cazador.

Designed over a period of eight months by naval architect Ed Monk Jr. and Tim Nolan Marine Design, working in close collaboration with the experienced owners, the captain and the yard, Cazador is the second-largest Nordlund yacht to date, behind 36.88 metre Southern Way III.

Key features include a fully-specced sportfishing cockpit, complete with bait tanks, custom rod lockers and tackle storage. Further forward, al fresco relaxation options have also been worked into the design, with an aft settee, casual dining for up to eight guests, as well as an ice maker and a day head.

Moving indoors and the main deck saloon features three sofas and pull-up chairs, creating enough seating space for 13 people to enjoy a film on the adjacent entertainment centre, with its trio of 65-inch screens. Further forward is a formal dining area with seating for eight and a transparent superyacht elevator, providing easy access to all three decks. This spectacular feature will be enclosed by a spiral staircase with steps that appear to float in mid-air.

Accommodation is for up to eight guests split across four cabins, including a main deck master suite, complete with his and hers en suites, walk-in wardrobes and a 65-inch television. Meanwhile, the crew quarters allows for a staff of up to five people.

The upper deck is split between the pilothouse and storage for the Nordlund 115 Expedition’s twin Novurania tenders.

Power comes from a pair of 3,200hp Caterpillar engines for a cruising range of 3,000 nautical miles at 14 knots, drawing on a total fuel capacity in excess of 30,000 litres.

The yard previously said that the owner is trading up from a 27 metre yacht that has covered more than 370,000 nautical miles in the past 20 years. Therefore it should come as no surprise to learn that the Nordlund 115 Expedition has an extensive itinerary in the works, taking in Nova Scotia, the Gulf of St Lawrence, Alaska and Central America.