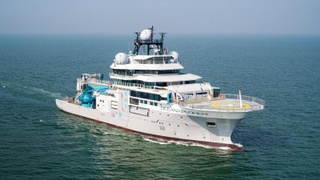 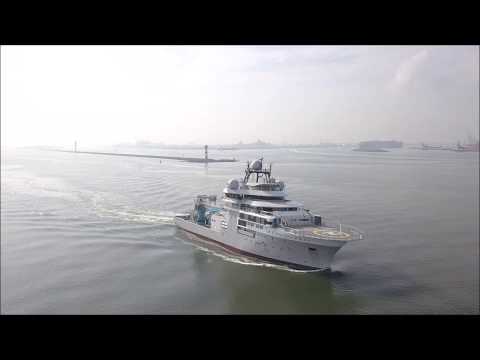 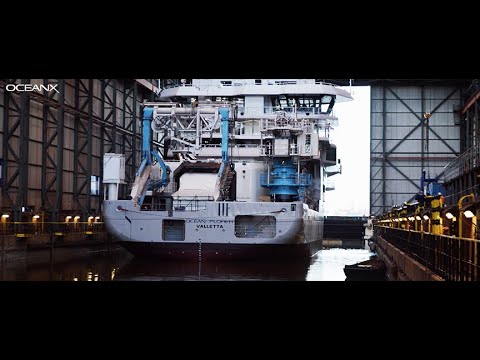 OceanX's 87.1 metre explorer superyacht OceanXplorer has been captured on sea trials after being launched by Damen earlier this year.

The supersized explorer, which left the dry dock on February 27, is being refitted into "the world's most advanced research vessel", according to OceanX.

The non-profit ocean exploration and media production company spearheaded by billionaire Ray Dalio and his son Mark Dalio is behind the plans to refit the 87.1 metre explorer.

The maiden voyage will be chronicled in a six-part documentary series entitled Mission: OceanX, co-produced by OceanX and the BBC, along with James Cameron for National Geographic.

Designed to build upon the success of the 55.75 metre Alucia (the initiative's production arm was formerly known as Alucia Productions), which appeared in the BBC’s highly popular Blue Planet II series, OceanXplorer was built by Freire and launched in 2010.

As part of the transformation into a high-tech scientific research vessel, the yacht is undergoing a major refit in the Netherlands.

Highlights onboard the refitted OceanXplorer include a forward helicopter landing deck with adjacent hangar, a garage capable of housing three 1,000 metre manned submersibles, a dedicated ROV deployment bay and aft deck launch and side boarding systems for scuba divers. Her upper deck also features a 40-ton crane and a 40-ton A-frame as well as space to load six metre and 12 metre shipping containers.

Inside, OceanXplorer boasts state-of-the-art wet and dry marine research labs and a media and production centre allowing the team to create high quality films and documentaries while at sea.

Design input has been provided by London-based Gresham Yacht Design. The studio previously said: “The biggest challenge has been making sure that the vessel satisfies the demands of differing disciplines, from the scientist through to the operators of the submarines, ROVs, helicopters and film production.

"There is so much still to discover in our oceans and OceanXplorer is the vessel that will allow OceanX to deliver truly extraordinary content and data to the world, especially the scientific community. To be involved in a project that is ground breaking is exciting and an important responsibility, it’s one that we are proud to be a part of.”

"Our team of scientists, researchers and filmmakers, including from the Woods Hole Oceanographic Institution and the BBC team that brought you Blue Planet II, will explore the oceans and create exciting content and stories to inspire a human connection to the sea," Mark Dalio, OceanX Media founder, previously explianed. "We plan to bring you the excitement of ocean discovery the way The Undersea World of Jacques Cousteau did."