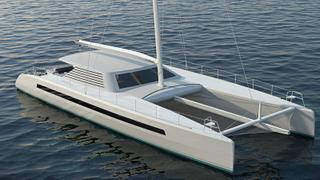 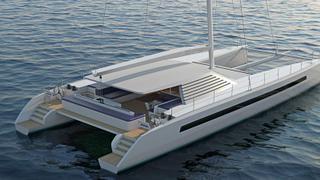 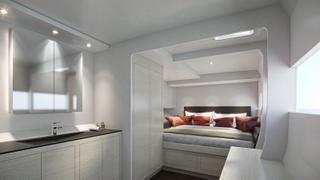 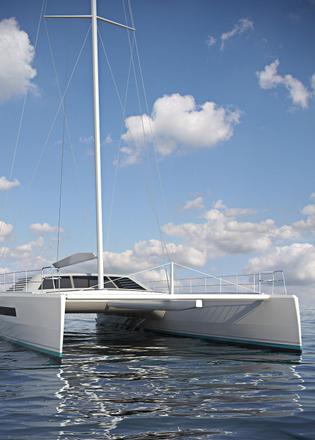 Developed in collaboration with Du Toit Yacht Design and due to be completed before the end of 2018, this new model is being built almost entirely from carbon fibre, with the hull, deck, bulkheads, mast, boom, longeron and forward cross-beams all in carbon.

The owner’s brief called for a sleek profile, and for that reason the coachroof has been slightly lowered compared with previous models from the yard.

Key features include the spacious cockpit, which boasts a versatile layout that can be quickly transformed from sunbathing mode to al fresco dining for up to ten people.

Moving further forward and the saloon makes full use of the Open Ocean 82HPC’s 11.7 metre beam, while a transparent gullwing door provides easy access to the wing deck. This spectacular feature is being built in Grenchen, Switzerland from a glass/acrylic composite called Liteshield. Inflatable seals ensure that this door is fully weatherproof.

Take a closer look at the Open Ocean 82HPC yacht

Accommodation is for up to six guests split between three cabins, all below decks. The master suite takes up the entirety of the port hull and boasts a study, massage room and exercise area. Meanwhile, the starboard hull comprises two en-suite guest cabins, the galley and a crew cabin.

Power comes from a pair of 110hp Yanmar 4JH110 engines and the 2,000 litre fuel capacity should ensure extended coastal cruises are on the cards.

Other superyacht projects currently under development at Two Oceans Marine include the Open Ocean 850LE power catamaran, a bigger sister of the South African yard’s 2016 launches Cake and Ultra Vires.