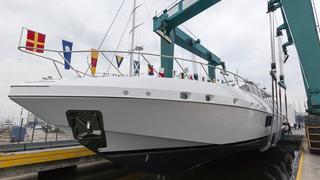 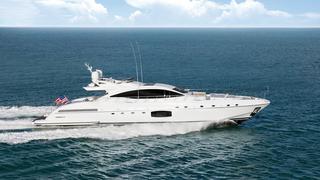 Overmarine has delivered the fourth Mangusta 94 hull to her American owner at a private event at its Viareggio yard.

Her owner has customised the interiors of this fourth hull, and personalised many details including the configuration of the superyacht. Updated for the American market, the Mangusta 94/04 places an emphasis on practicality, shown in the internal stairway access to the flybridge and the bar-kitchenette on the main deck.

She’s part of the Mangusta series defined by its luxurious open maxi design. Whilst each can be personalised with a customised interior design, they all share the same design DNA that makes them perfect for running at fast speeds and exploring close-to-shore cruising grounds thanks to their shallow draughts and hydro-jet propulsion.

The fourth Mangusta 94 makes the most of her outdoor space, with a sunbathing area, larger stern swimming platform and liveable sundeck, which features a driving station on the sundeck.

Little is known about the interior of this superyacht, except that the owner’s area boasts breath-taking views and is flooded with light thanks to her generous use of glass.

Like her sisterships, she also has a number of technical innovations that improve comfort on board, like the zero speed stabiliser that can be used at anchor and underway. And her 2600HP engines, often installed on much larger yachts, both power her to a maximum speed of 38 knots and make cruising at 10 knots more comfortable.