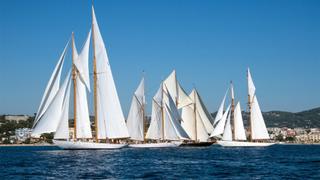 The association was launched last week after a group of owners and representatives of classic schooners met for a dinner and reception aboard Puritan.

The schooner belongs to Tomas de Vargas Machuca, who has spearheaded the foundation of the association alongside his captain Simon Pandolfi.

Following the event, the 10 owners of Invader, Orion, Mariette of 1915, Puritan, Orianda, Aschanti IV of Vegesack, Elena of London, Atlantic, Germania Nova and Naema have fully committed to the project.

The association now intends to build an annual programme of events for owners of classic schooners, including individual regatta prizes such as ‘Schooner of the Year’.

Plans for the first event, which is set to take place in Capri next spring, are already underway.

The owners decided to form the new association after taking part in classic yacht regattas and finding they were held at a “disadvantage” when racing against classic yachts with different sailing characteristics.

The association has already gained the support of the International Maxi Association, which encourages all types of maxi yacht racing worldwide.

The association’s secretary general Andrew McIrvine said: “This organisation is a wonderful addition to the maxi world. Modern classes may come and go. The interest in preserving these magnificent craft suggests that they will outlive them all.”