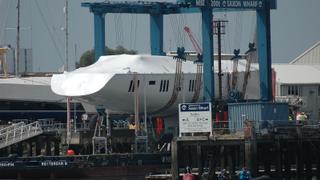 The first hull in Oyster Yachts’ flagship Oyster 118 (1225) series has been moved to Cornish shipyard Pendennis for completion. A photograph shows the shrink-wrapped hull, which was due to be launched in May this year, en route to Pendennis’ yard in Falmouth earlier this month.

A joint statement released by Pendennis and Oyster said the two yards “are now working together to deliver the first hull in the series which will be handed over to her owner next year”. It added, “Oyster and Pendennis, two market leading British shipyards, share a vision to protect and secure a successful future for the UK marine industry.”

He added that Pendennis finishing the first 1225 will enable Oyster to “focus on its core boatbuilding business from 50 – 90 feet”. “Partnering with Pendennis is the perfect marriage of two great British companies to do what they are best at,” he said. “It allows Oyster to extend our range to the superyacht class and leverage the proven expertise of Pendennis in the actual build.”

The 37.45 metre sailing yacht was in-build at Oyster’s Saxon Wharf facility when the company went into administration in April this year. Tech entrepreneur Hadida subsequently acquired the business and worked quickly to rehire 400 of the original 420-strong workforce.

Hadida revealed that “huge progress” has been made on Oyster’s recently announced entry-level model which Hadida referred to as the “baby Oyster project”.

He previously told Boat International, “Rather than making Oysters exclusive to people who have the money to buy a 50 foot (15 metre) yacht, we want to open it up to new owners. The sooner we get them into the family, the better.”