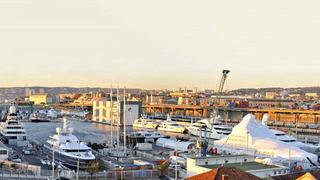 The Palumbo Group has announced its acquisition of a superyacht shipyard on the Mediterranean in the Port of Marseille, France.

On 3 February, 2014, the Commercial Court of Marseille proclaimed that Palumbo Group had won the tender for the acquisition of International Technic Marine (ITM) in Marseille, which had sought bids in late 2013. Palumbo was going up against the Maltese company Melita Marine Group in the final stages of the tender until the competition withdrew its bid just before the court made its final decision.

Palumbo Group has renamed the shipyard Palumbo Marseille Shipyards ITM and has retained the yard's eight managers. Located in the center center at the Port of Marseille, the superyacht-dedicated shipyard is one of the biggest in the Mediterranean covering approximately 12,000 square metres. The shipyard comprises four large dry docks ranging from 80 to 126 metres, a 95m over-water shed (pictured above) and more than 300m of quays.

Palumbo Marseille Shipyards ITM joins the network of Palumbo Shipyards in the Mediterranean – now with outposts in Naples, Messina, Marseille and two yards in Malta – and the new yard will offer refit services and also be an after-sale point of service for Columbus Yachts, Palumbo Group's new build superyacht brand. Palumbo recently announced that its Columbus Classic 68m build is on track for delivery in 2016, proceeding at the Palumbo Shipyard in Italy. Palumbo is evaluating making investments to the newly acquired yard, including the addition of new equipment and lifting systems in order to increase the range of services on offer. The shipyard is set to be open under its new ownership next week.