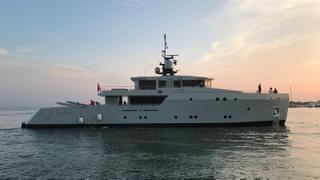 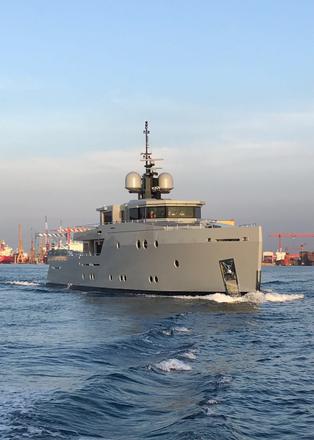 The 39.1 metre Tansu motor yacht Project Echo-R has been launched in Istanbul and named Esosh, it has been confirmed.

Splashed on June 22, this tri-deck cruiser was built from a wood and epoxy hull and superstructure to RINA standards with naval architecture developed by Dutch studio Diana Yacht Design. Delivery is scheduled to take place before the end of the month.

As these first images show, her exterior sports the yard’s characteristic military aesthetic, with a vertical bow, raised pilothouse and sleek, silver topsides. Several circular portholes bring natural light into the interior, which was designed by UraStudio.

Accommodation is for eight guests split across four staterooms, including a main deck owner’s cabin, a VIP suite and two double cabins. Meanwhile, the crew quarters allows for a staff of up to five people. Star features include her superyacht sundeck, which is split between a sheltered skylounge and a large al fresco dining area aft.

Power comes from a pair of 800hp CAT C18 ACERT engines, which are performing well on sea trials, the yard added. Twin davit cranes on the aft deck should make for easy launching and retrieving of her two tenders and various superyacht water toys.

Other superyacht projects currently under development at the Turkish yard include the 44 metre flagship yacht Project Orca and the 43.7 metre Project Cyclone, both of which are due to hit the water before the end of the year.