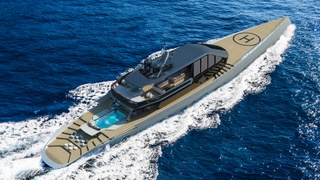 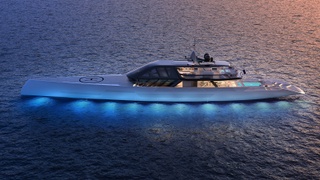 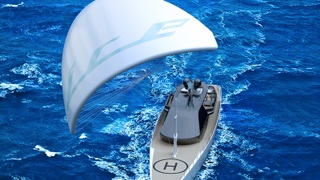 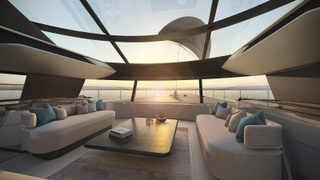 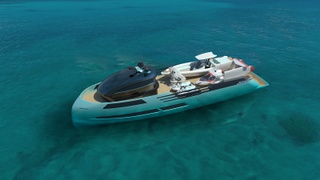 Designed together with Dykstra Naval Architects, ICE Kite is set to be the longest yacht in total length under 500 GT at the time of building. According to the studio, the owner of the superyacht is "a German entrepreneur" who first commissioned the design in mid-2018.

ICE Kite is characterised by "sleek" and "sophisticated" exterior lines with an extensive use of glass throughout. According to the studio, the owner's brief was "to create a yacht that feels like she is an integral part of the sea, inspired by sea animals".

With an aluminium hull and carbon fibre superstructure, ICE Kite combines kite sailing practices and a low resistance hull to optimise its engines for efficient use. A pair of 735 KW main engines give ICE Kite a maximum speed of 17.4 knots.

Up to 10 guests can be accommodated on board ICE Kite in four comfortable cabins. Features of this superyacht include a beach club area with a pool, an al fresco dining area for 12 guests and a helipad at the bow.

Below deck, the Kite Lounge, which also functions as a dining room, has been specially designed for watching Kite's hypnotic flight during the cruise. This outstanding area has a complete glass surrounding, offering a 180 degree view. Further interior features include an elegant spiral staircase and a dedicated spa area.

ICE Kite will be constructed simultaneously with a smaller project, ICE Ghost. The 26 metre yacht will serve as a dedicated support vessel for ICE Kite. With a matching exterior, the yacht has been designed to continuously cruise with ICE Kite and carry toys and tenders for her mothership.

ICE Ghost can carry an Icon A5 airplane, a U Boatworx Superyacht Sub 3, a 12 metre custom-made performance RIB with a top-end speed of 60 knots, also designed by Red Yacht Design, and a pair of Seadoo jet skis on her main deck. There is a further garage space for holding diving equipment, SeaBobs, and an on-site maintenance area.

The main deck of ICE Ghost can alternatively be used as a party space and two twin cabins below deck can host guests or staff. With a steel hull and carbon fibre exterior, ICE Ghost can reach a top speed of 16 knots.

Red Yacht Design have suggested that "the owner is strongly considering to build both ICE Kite & ICE Ghost at a Dutch Shipyard", adding that "more info will be announced after the construction has started".

Inside the Best Superyacht Toy Garages