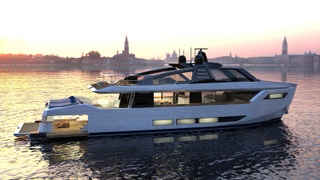 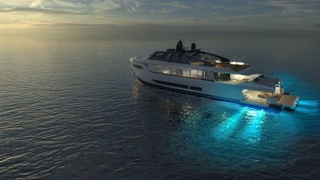 The 26.7 metre Bulldog 88 concept will feature as part of the builder’s new fleet as it prepares to relaunch the brand.

Key exterior features include a large stern sundeck, including a 30 square metre beach club. The upper deck also features a sundeck area of around 50 square metres and includes a Jacuzzi situated at the bow for maximum privacy.

The formal dining area can seat a maximum of 12 guests and is flanked by tall sliding doors that can close off the outside environment depending on weather conditions.

Accommodation is for a maximum of eight guests in 165 square metres of indoor living space. Guest accommodation comprises a full seven metre beam master suite on the main deck and two further double en-suite staterooms on the lower deck. Crew quarters for a staff of three also sit on the lower deck.

The concept follows the presentation of Curtó’s 63.2 metre Hypnosquid design, which is inspired by the physical characteristics of the cuttlefish.