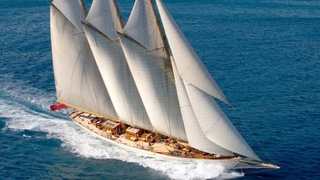 The 64.85 metre sailing superyacht Adix has begun a four month refit and Lloyds survey period at The Yard Brisbane (TYB) in Australia.

The three masted schooner, which was built in Spain 1984 to an Arthur Holgate design, is currently cruising the South Pacific in the run up to the America’s Cup in Auckland in 2021.

While having a long-term refit relationship with the Pendennis yard in Cornwall, the Adix team selected TYB to undergo maintenance work while the yacht is based in the Southern Hemisphere.

Speaking about the yacht’s arrival at the yard, international development manager Mark Phelps said: “We recognise that while looking for facilities in the Southern hemisphere the Adix team would have been measuring every facility against their ‘home’ shipyard Pendennis, a highly respected Northern European yard. To be selected as their yard of choice supports our belief that we hold a place on the world refit stage.”

He added: “Adix is a truly iconic yacht and we are delighted to have her visit us.”

Captain Paul Goss explained that TYB’s extensive facilities, which include two high clearance refit halls of 90 and 70 metres, were key in selecting the yard.

“Adix occupies a lot of space when you lay the three rigs on the ground–the sum of Adix’s spars laid end to end is over 220-metres. The Yard Brisbane’s spacious facilities, particularly their refit sheds, were excellent in that respect,” he said.

It comes after Adix completed an eight-month refit at the Pendennis yard in July 2015. The extensive programme included a redesign of the deck house, addition of new portholes and engineering overhaul.

Adix’s first transformation took place in 1991, when the yacht underwent underwent a transom modification and full interior strip out, with design by Dykstra Naval Architects. This remodelling programme saw Adix named as ‘Best Refit’ in the ShowBoats Awards that year.