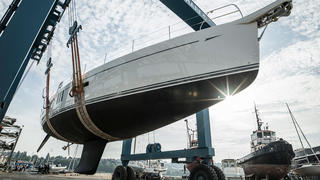 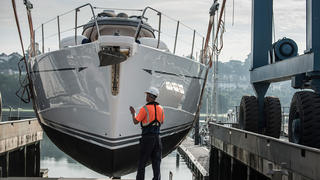 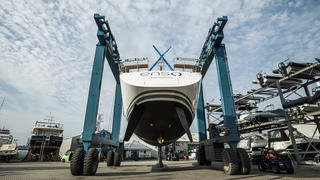 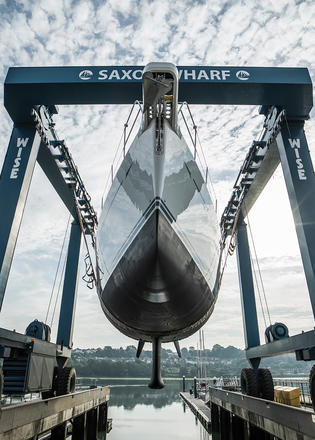 The sixth hull in the Oyster 825 sailing yacht series has been launched and called Enso, the British yard has announced.

This all-GRP sailing yacht has been specifically commissioned to take part in the second Oyster World Rally — a two and a half year circumnavigation that is due to set off from Antigua in January 2017 and sit out the 2018 Pacific cyclone season in New Zealand.

Her owner was looking to replicate the levels of comfort and wellbeing that they are accustomed to on-shore. To that end, Enso has been fitted out with extensive air conditioning and an advanced water purification system. What’s more, additional shielding was added to her electrical cabling to minimise electromagnetic field transmission.

Accommodation is for nine guests, with a master cabin, two convertible twin cabins and a pipecot berth, while the crew quarters are suitable for a staff of up to four.

Take a closer look at the Oyster 825 sailing yacht Enso

Enso’s 3Di Endurance sails were created by North Sails, while her in-boom furling carbon rig is courtesy of Hall Spars. A combination of captive and deck-mounted winches offer hydraulic sail handling, while auxiliary power comes from a single Cummins QSB5.9 diesel engine. With a 6.31 metre beam and a maximum draught of 3.43 metres, she displaces 56 tonnes.

This new sailing yacht arrival follows on from previous globetrotting Oyster 825s, such as Maegan, which finished second in class at the 2016 Loro Piana Caribbean Superyacht Regatta. Other notable launches from the Hampshire-based yard include the 27 metre Lush — one of our top ten British superyachts.