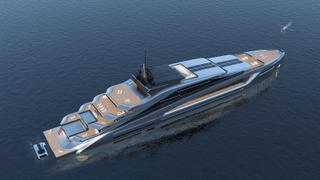 The mammoth concept sports a number of stand-out, extreme features including a 24-seat cinema, bowling alley and a showroom for a classic car collection.

The “Zen-inspired” interior also includes a number of Koi ponds in the lobby connected via tunnels. Elsewhere, a wellness area would include a massage studio, spa, gym and Turkish bath.

The California design features a steel hull and aluminium superstructure with an exterior design sporting large expanses of glass via walls, balconies and doors.

Key exterior features include a “masculine bow flowing into feminine shaped lines” and three pools situated on the aft of two decks, creating a cascading waterfall down the stern of the boat. One pool even includes a surf riding machine enabling the owner to “enjoy the California lifestyle wherever the yacht is located.”

The “fresh contemporary architectural look”, as Strand called it, includes a spa pool on the foredeck, forward of the helipad. The hangar for storing the helicopter would sit beneath the helipad, operated by an automatic elevator system.

The design also features a hybrid electric propulsion system that allows the yacht to run at a reduced cruising speed of 11 knots for five hours on power provided by a 60-tonne lithium-ion battery bank. All tenders and toys on board would also be electrically powered.

Accommodation would be for a total of 24 guests and 50 crew in an interior decorated with materials including reclaimed wood, natural stone, inside wall waterfalls and large aquariums. The interior would also include a lounge area with a bar, a game room and a night club.

While no renderings of California's interior have yet been released, Strand said it is “very different from all other yachts in this size range.” Strand also claimed a number of superyacht yards have shown interest in building the project.