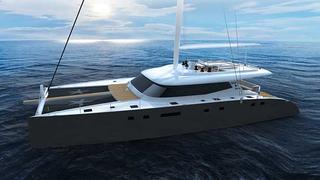 According to the builder, Sunreef Yachts, the wet deck is now being painted, teak flooring has been installed on the flybridge and in the cockpit and most of the rigging has been installed; the interior is also being installed, which is styled to a modern moitf. The launch is scheduled to take place the beginning of July 2013, and the yacht will debut at the Cannes show in September.

'This is first yacht built by Sunreef,' says Pola Jendraszek with Sunreef Yachts. 'The owner is a friend of the owner of CHE who recommended him to the Sunreef shipyard.' While the owner and his wife are sailing enthusiasts who have logged many miles together, they chose to have crew on board their Sunreef 80. The owners have an ambitious cruising plan to sail from the Mediterranean to the Caribbean and then across the Pacific to the Indian Ocean.

Although the yacht is designed for personal use, not racing, the owner's brief put a priority on performance. One requirement was for the yacht to be capable of reaching 20 knots in a medium breeze, thus inspiring the fully carbon construction and light weight of the Sunreef 80, which was initially designed not to exceed 45 tons – 60 when fully loaded.

Sunreef currently reports seven projects underway in its shipyard, both power and sail, including the first Sunreef 60 LOFT.